NWT youth take to streets for climate action in BC 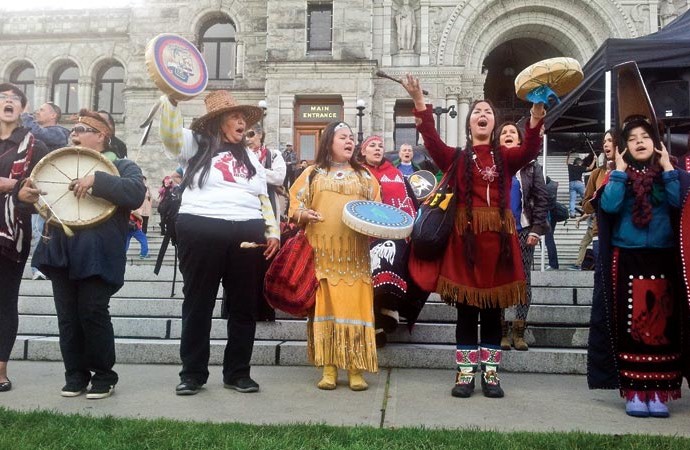 Kiera-Dawn Kolson of Yellowknife (second from right) leads chants with other indigenous women on the steps of BC legislature on Oct. 7, a national day of action in the Idle No More movement.Photo: Iman Kassam.

Youth from across the NWT have returned home with sharpened tools for grassroots political action against climate change following a national gathering in Victoria, BC that saw hundreds blockade the doors of the legislature to protest oil and gas pipelines, tankers and “tar sands.”

A handful of Northerners joined hundreds of concerned youth from across Canada on Oct. 4-7 for the latest PowerShift conference on the BC coast to talk strategy and share perspectives on mobilizing against the fossil fuel industry and promoting greener alternatives.

“It’s really nice to be at an event with 600 people who really get what you’re talking about and really have an idea of the sense of urgency of organizing around climate change, and who also see the value of working across cross-cultural barriers to form more solid lines of opposition,” said Eugene Boulanger, who spoke on a panel about climate change in the context of the North.

“It was really valuable to cross-pollinate and spread ideas across like-minded people who are roughly in the same generation as I am.”

Boulanger, who is originally from Tulita but now splits his time between Yellowknife and Vancouver, said tackling the industry responsible for climate change is a lot more complicated in a Northern setting.

“There’s a difference between organizing in Northern communities and in urban centres,” he said. “In the city, in Vancouver, there’s a saying, ‘No pipelines, no tankers, no tar sands, no problem.’ You say that at a rally with 500 people, and it feels good and everybody does it. But if you try to say something like that in a community, say, in the Northwest Territories, it’s more complicated, because then you’re talking about your uncle and your cousin and your brother who have to work in these projects, and this is how they put bread on the table at the end of the day. In Northern communities, I think, it’s more difficult to have these conversations.”

Fellow Northerners Kiera-Dawn Kolson of Yellowknife, Daniel T’Seleie of Fort Good Hope and Caleb Behn of Fort Nelson, BC also spoke on the panel about industrial development in the North, touching on issues of hydraulic fracturing and direct impacts of climate change on traditional livelihoods.

Iman Kassam of Yellowknife also attended the conference, which culminated in an Idle No More march on the Oct. 7 national day of action to mark the 250th anniversary of the Royal Proclamation, the document signed by the Crown of England regarded as one of the first declarations of the rights of indigenous peoples.

She said she was particularly struck by the camaraderie shown between indigenous and non-indigenous peoples at the march, which took on issues of pipelines, fracking and oilsands development on indigenous territory.

“I saw a lot of non-indigenous allies marching hand in hand in solidarity,” she said. “Just the sheer number of people was amazing and overwhelming.”

Kassam said watching young, indigenous people lead the march with chanting, singing and demands to the government to protect traditional lands was eye-opening.

“It put the struggle, the fight, into a national context for me. It opened my eyes to the magnitude of this movement. The issues of land, sovereignty, sustenance, environmentalism and the future of this country are layered, loaded and controversial. The experience was humbling and magnificent,” she said.

PowerShift is an annual youth summit focused on climate change, and has been held around the world. The first Canadian summit was held in Ottawa in 2009.