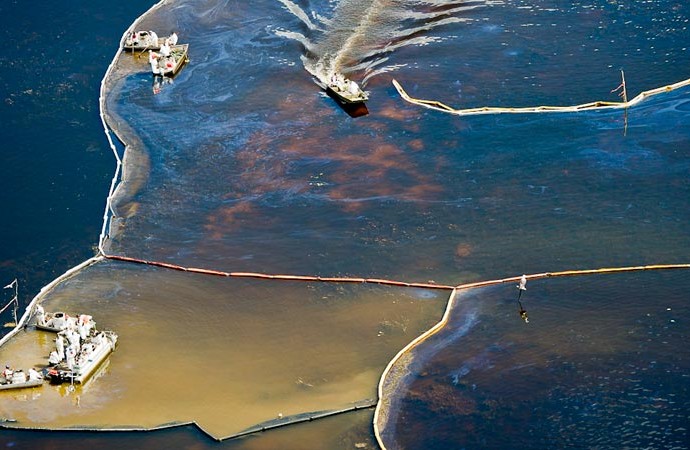 Clean-up of bitumen-affected areas around Cold Lake is now 80 per cent complete with berms in place to prevent leaks from entering nearby water bodies, according to the company.Photo: Cold Lake First Nations.

New statements from Canadian Natural Resources Ltd. (CNRL), the company responsible for ongoing bitumen leaks at an oilsands site near Cold Lake in northeastern Alberta, say cleanup is now 80 per cent complete and the challenge of preventing future leaks is “totally solvable.”

Julie Woo, public affairs advisor with CNRL, told The Journal in an email that the company has obtained access to the leak sites, removed vegetation where necessary and built berms to contain the seepage.

CNRL was issued a cleanup and remediation order by Alberta’s Environment and Sustainable Resource Development (ESRD) in September, four months after the company reported bitumen surfacing in four separate areas on its Primrose and Wolf Lake oilsands operation sites.

Jessica Potter, communications officer for ESRD, confirmed that the surface sites have been cleaned with the exception of the fissure area where CNRL has built structures to contain the ongoing release of bitumen.

Potter said CNRL has submitted a detailed plan for determining the impacts to groundwater and the root causes of the leaks as part of the enforcement order, which has been approved by the department.

While a timeline has not been released, “there is an expectation of expediency,” Potter said. “There’s always a possibility of further enforcement action if needed during the investigation.”

CNRL stated it is confident that wellbore failures are the root cause of the Primrose seepages, not blows to the caprock integrity of the area caused by steam injection procedures, as was suspected by the Alberta Energy Regulator (AER) in 2009 after a similar incident in the area involving another CNRL project.

“To date, we have identified four legacy wells as the most likely wellbore failures that are the root cause of seepages,” Woo said. “Two of these four wells have identified mechanical failures and we will be undertaking additional work to prove this conclusively.”

Another well is currently under review and the last is awaiting approval for access, she said.

A spokesperson for Cold Lake First Nations (CLFN), whose treaty territory surrounds the leak sites, said the incident shows that the AER is not doing enough to prevent faulty technology from being used by oilsands companies.

“The technology they are using, the steam assisted gravity system, we used to always say it would cause adverse effects once this development comes ahead,” said band councillor Cecil Janvier.

“We used to be given acknowledgement that it’s all fool proof, safe, all that, but our elders told us to be watchful of what goes on around us,” he said.

CLFN has been kept in the loop as far as remediation efforts are concerned by both CNRL and the AER, Janvier said; however, he said the conversation should have started long before the leaks were ever a possibility.

He said an incident like the Cold Lake leaks shouldn’t be the reason the AER decides to consult with the First Nation.

“We want to be included in the regulatory process, meaning at the time of signing leasing and signing permits,” Janvier said. “This is our traditional territory.”