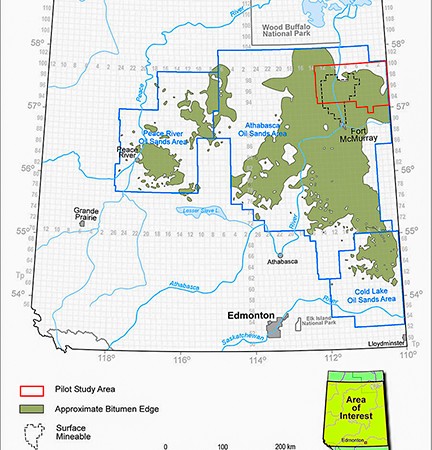 The Alberta Energy Regulator (AER) quietly put the freeze on steam-assisted bitumen mining projects in the Fort McMurray region in January due to concerns about impacts on caprock integrity.

In a bulletin issued to industry on Jan. 28, 2014, AER’s vice president of operations Kirk Bailey said steam assisted gravity drainage (SAGD) projects would be suspended until the completion of a “thorough technical review” to determine the factors affecting reservoir containment, and that decisions on applications for thermal oilsands projects would be deferred until formal regulatory requirements are developed.

“The AER is satisfied that deferring decisions on applications under these circumstances supports safe and responsible development at these projects and will ensure the consistency of regulatory decisions until new fully consulted and technically supported requirements are in place,” states the bulletin.

Five companies have been affected by the freeze, which is limited to the shallow – 100 to 150 metres deep – thermal area of the Wabiskaw-McMurray deposit directly north of Fort McMurray.

According to AER spokesperson Tracie Moore, the study into reservoir containment is part of the regulator’s ongoing assessments to ensure requirement appropriately mitigate risks of development, and has been a priority for many years.

SAGD is a type of in situ oilsands production that pumps steam at high pressures underground to heat the bitumen so that it can be pumped to surface.

Currently, the AER assesses reservoir containment by measuring caprock integrity and determining the maximum pressure at which steam can be pumped underground.

“A caprock must have sufficient thickness and competency and be continuous across the project area to contain steam and heated reservoir fluids,” states the bulletin.

Moore said the shallow area has been specifically chosen as a test area.

“The AER believes that the risk of steam and reservoir fluids being released at surface is greater if reservoir containment is compromised due to the shallow nature of the resource,” she said.

“The AER has not yet established a release date for the technical regulatory review of in situ reservoir containment,” she said. “Publishing formal requirements is a complex technical issue and we are committed to giving stakeholders a thorough opportunity to provide input.”

Once the shallow thermal area has been reviewed, the AER intends to review the “deeper area,” Moore said.

The suspension does not impact Canadian Natural Resources Ltd.’s (CNRL’s) steam in situ operations near Cold Lake, where bitumen has been leaking inexplicably and unstoppably to the surface at several sites for nearly a year.

“The current regulatory focus in the Cold Lake area is to investigate the root cause of the CNRL Primrose incident and to use what is learned through the investigation to ensure reservoir containment is maintained at cyclic steam simulation (CSS) operations,” Moore said.

A second project by the AER along with the Alberta Geological Survey is doing geological mapping of a larger pilot area overlapping the shallow thermal area in northeastern Alberta to measure caprock integrity.

Started in 2009 by AER’s predecessor, the Energy Resources Conservation Board, the work intends to get a better understanding of the geological factors affecting the quality of caprock seals above bitumen resources.

The Oil Sands Caprock Integrity Project (OSCRIP) works in collaboration with the technical review of reservoir containment, but is specifically aimed at geological mapping and the characterization of geology above and below bitumen reservoirs.

While an incident review database was supposed to be established for in situ projects through OSCRIP, Moore said that has now changed.

“After an initial review of incidences related to thermal in situ oilsands, we found that there was insufficient data to create a database as was initially planned as part of the Oil Sands Caprock Integrity Project. The AER now publishes all incidents on its Incident Reporting tool, on the AER website.”

She said new technical reports from OSCRIP will be posted online soon, but did not give a date.