New species at risk book comes out in Dene languages 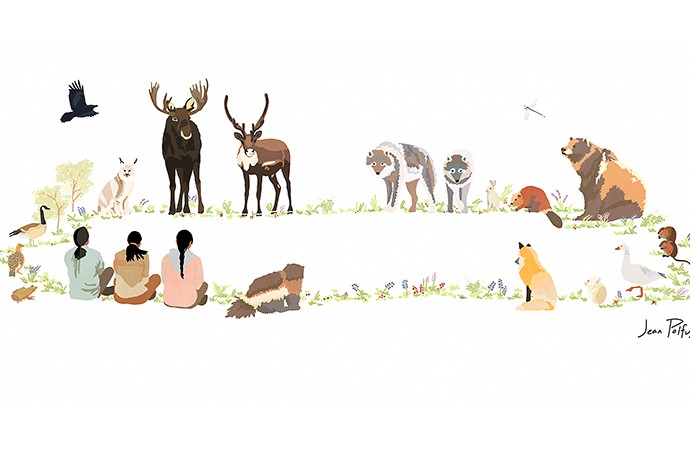 Inspired by drawings by elder Alfred Masuzumi, Jean Polfus says her artwork for the Sahtu species at risk book complements the story’s use of Dene languages.Photo: Jean Polfus.

Aboriginal language is being recognized in a big way in the Sahtu this month with the final touches going on a brand new book written in multiple Dene languages about species at risk in the region.

Using words from multiple Sahtu Dene dialects as well as images representing the land, animals and people, the book is a celebration of culture and a roadmap for the community’s involvement with species at risk, said Deborah Simmons, executive director of the Sahtu Renewable Resources Board (SRRB).

Called Remember the Promise, the book is a partnership project of the GNWT departments of Environment and Natural Resources and Education, Culture and Employment and the SRRB. The idea for the book came out of a Sahtu Species at Risk Terminology Workshop held in Deline last spring.

Betty Harnum, the linguist behind the terminology workshop and resulting book, explained that a story was the natural choice to come out of the species at risk discussions that were mainly with Sahtu Dene elders.

“A traditional way of teaching is just through telling stories. You kind of draw your own lesson through it,” she told The Journal.

The book weaves a tale of the community’s relationship with the animals, plants and land that surround them as told by stories from Sahtu elders. Recognizing the special relationship Dene people have with the land, the book aims to suggest how the communities can help protect species at risk in their region.

“We tried to see the work that needs to be done on species at risk through (the community’s) eyes as much as we could in order to develop an understanding of how they can be involved in the process in meaningful ways,” Simmons said.

“It was really, truly an effort at crosscultural understanding, not just translation,” she added.

There will be two versions of the book published, one in K’asho Got’ine and another in Tulita and Deline Got’ine. The majority of the words are in English, but intermingled with terms in the Dene languages.

Artwork its own language

Book illustrator Jean Polfus said her goal in creating the images was for readers to make a visual connection between the story and the Dene languages, which can help people learn the terms more organically.

“In the book we don’t define the Dene word nogha for wolverine, but we say ‘nogha is…’ and then on the page there is a drawing of a wolverine, so I think when we use methods like that it makes it a little more intuitive,” she said.

Both Polfus’ cover image and one of the illustrations inside were inspired by drawings by Alfred Masuzumi, a late elder from the Sahtu whose artwork is well known in the community.

“He was a prolific artist and did some amazing work, so I tried to use some of the ideas that he had already portrayed in his own drawings, but do it in my own style,” Polfus said.

The second half of Remember the Promise is dedicated to the latest information from the NWT’s Species at Risk branch of the GNWT and includes a terminology list in the various Dene dialects.

Currently four species in the NWT are officially on the Species at Risk list: the boreal caribou, peary caribou, polar bear and hairy braya plant.

Two other species, the dolphin-union caribou and the northern leopard frog, have been assessed as at-risk by the species at risk committee and are awaiting official addition to the NWT Species at Risk list.

Remember the Promise is expected to be published and circulated in the Sahtu next month.