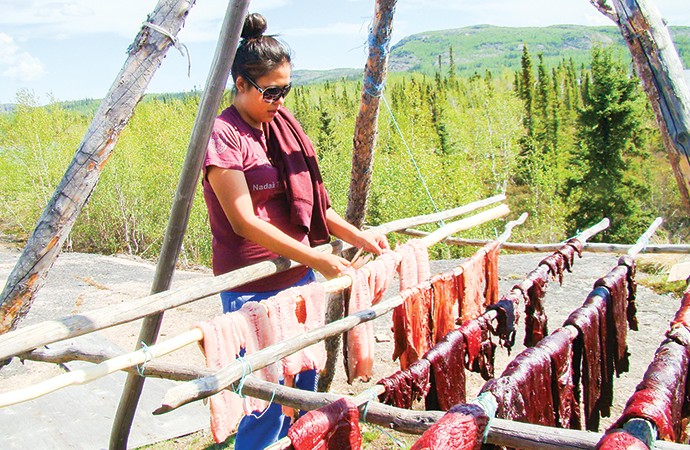 Gleadia Nitsiza from Whati hangs fish to dry while on the land during the Imbe group leader training last summer.Photo: Karen Lafferty.

Each summer when post-secondary student Janelle Nitsiza returned home to Whati from Calgary’s Mount Royal University, she felt she had been missing a part of herself.

“I really did notice that I was losing touch with my culture,” she shared with The Journal. “Everyday things that I would see at home, like my grandma making dry meat or me helping her tan hide, I didn’t get a chance to do that because I didn’t have the resources down south.”

Luckily for Nitsiza, each summer she had the option of taking the award winning Imbe camp, a summer-long program run by the Tlicho government that looks to re-engage high school and post-secondary students with their culture.

Standing out amongst other culture camps, Imbe, which means summer in Tlicho, is based on the philosophy of Chief Jimmy Bruneau, who in the 1970s warned that the Tlicho people must become “strong like two people,” as later articulated by elder Elizabeth Mackenzie.

Predicting that the European world would eventually encroach upon the North, Bruneau suggested the Tlicho learn from the Western way and pursue higher education, all the while keeping firmly in touch with their traditional lifestyles and language.

The Imbe program aims to accomplish Bruneau’s goal by targeting high school and post-secondary students and hitting them with a “blast of culture,” Imbe’s program manager Paul Cressman said. 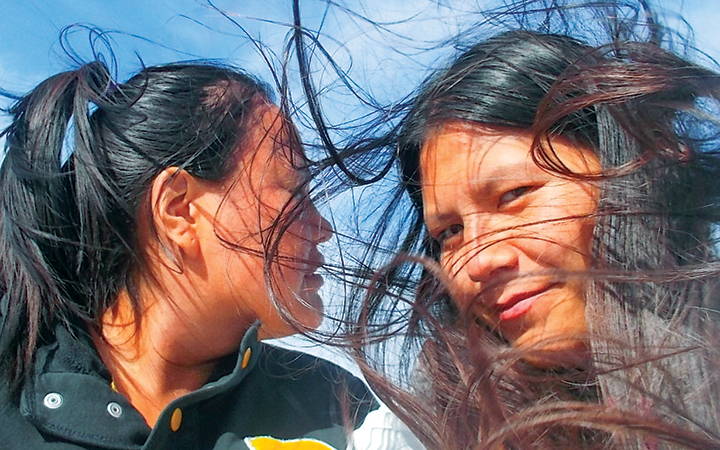 From left, Judith Modest and Kayla Moosenose, both from Whati, participated in last year’s camp.

After three years in the Imbe program, Nitsiza is now the assistant program manager and helps organize the camp with Cressman each year.

“I know how some of these first year students feel. The first time you go you’re shy sometimes, and I get them really comfortable and we become friends and we become colleagues. We work together and we learn together,” Nitsiza said.

While the focus for this year’s camp is on-the-land travel, Cressman said language will be an important component of all activities during the camp.

“Because the language is so linked to the land with the place names and the animals and the activities, it’s the ultimate classroom for Tlicho language because the two are so intimately linked,” he said. 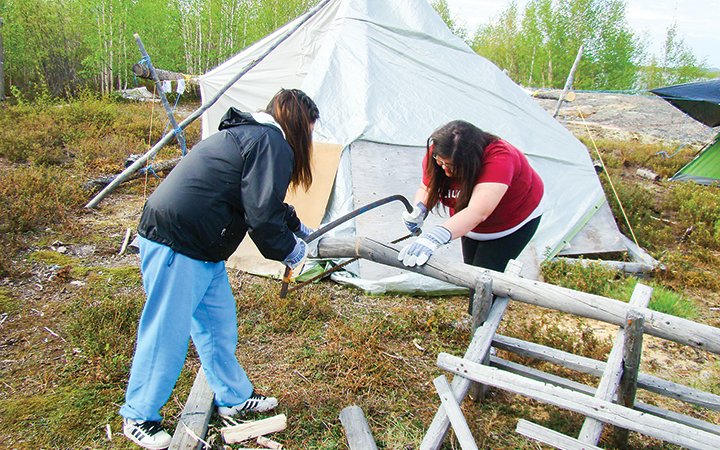 From left, Jasmine Blackduck and Janelle Nitsiza cut wood while on the land during last year’s Imbe camp.

Over the next month, Cressman and Nitsiza will employ two group leaders in each Tlicho community. Once chosen, the leaders will be trained for four weeks in May before heading back to their communities to prepare for the camp in July and August.

During the three-week camp, students will be learning from Tlicho elders on the land by fishing, making dry fish, drumming, sewing and storytelling, among other activities.

“Traditional skills are seen as the motivating factors that show young people that they have this amazing land right at their doorstep and to motivate them to get back up and practice their culture on the land, and then also give them the safety skills that they need to travel safely,” Cressman said.

The hope is that in the future the Tlicho community will have a qualified workforce that is well versed in both modern education and traditional practices, he said: “Strong like two people.”

To find out more about the Imbe camp, go online to http://tlicho.ca/government/departments/culture-lands-protection/cultural-practices/tlicho-imbe-program

In the Apr. 22 story “Award winning Imbe camp returns this summer” it was incorrectly stated that Chief Jimmy Bruneau warned the Tlicho people to be “strong like two people” in the late 1800s. In fact, Bruneau’s warnings were made in the 1970s and were later articulated as “strong like two people” by elder Elizabeth Mackenzie. The Journal apologizes for this error.