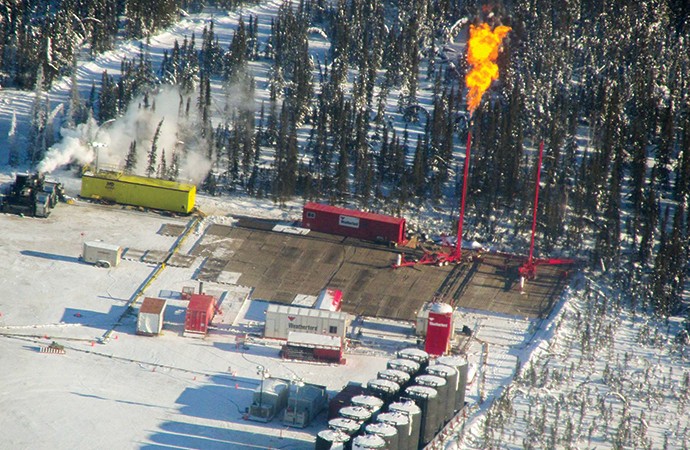 ConocoPhillips does exploratory fracking for shale oil near Norman Wells. The company has confirmed it will not be funding exploratory drilling in the Sahtu region for the 2014-2015 winter season.Photo: Roger Odgaard/Facebook.

Global energy company ConocoPhillips has decided not to allocate capital funding for any exploratory drilling in the Sahtu region of the Northwest Territories for the 2014-15 winter season, delaying any future fracking by the company until 2016 at the earliest.

ConocoPhillips spokesperson Lauren Stewart told The Journal that the company still plans to submit its application to do more exploratory hydraulic fracturing, or “fracking,” in the Canol shale oil play of the Central Mackenzie this week, but that a call made internally by management last week means there will be no capital funding to drill this year.

“We do not anticipate any drilling or testing work on EL470 for the upcoming winter season,” she said. “ConocoPhillips is a global exploration and production company, so we have activities in 27 countries. Projects just like the Canol compete internally for funding, and so a decision was made to allocate funds for other projects for the 2014-2015 winter drilling season.”

Stewart could not give any more information on the reason the Sahtu program is not being prioritized this year, or how many employees in the Sahtu would be affected by the decision.

“ Unfortunately I can’t speculate on how our drilling and testing work would or would not affect employment numbers in the region for the 2015 winter season,” she said.

“Since we will not have funds in place to operate next year, we will be demobilizing the remaining equipment over the summer. We anticipate issuing RFPs (requests for proposals) for this work in the next week.”

The regulatory application being made to the Sahtu Land and Water Board requests approval to drill and frack up to 10 horizontal wells over the next five years.

Stewart said the decision to file the application despite the lack of funding is in order to position the company to be able to move forward in 2016.

“In addition to that, we have regulatory requirements under our existing permits, so we’re going to continue obviously with reporting on our environmental data through the Sahtu Land and Water Board, and on the ground water results surface monitoring,” she said.

She said community consultations on the application would most likely begin to take place this June in the Tulita District, which includes Norman Wells, following the spring hunt.

The company has two years to report the technical results of its first exploratory horizontal drilling program, which wrapped up in March.

Though Stewart could not reveal the total cost of the 2013-14 winter drilling, she said the company had exceeded its five-year work commitment of $66.7 million, which included seismic and drilling work.