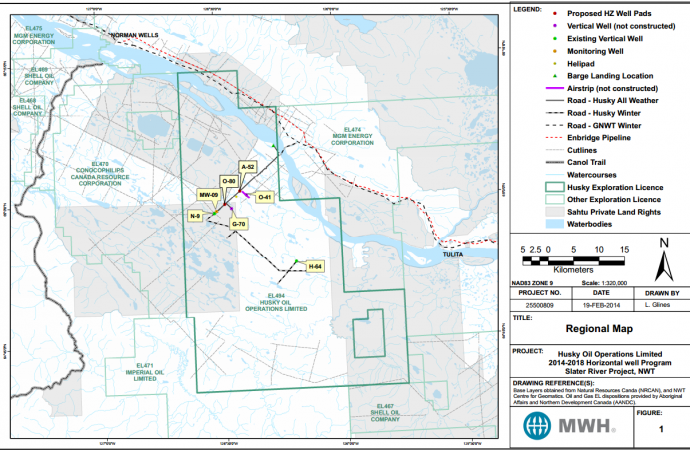 Husky Energy submitted its application to frack up to four horizontal wells in the Canol shale play of the Sahtu region on Monday, which if approved would make it the second company to use multistage hydraulic fracturing in the Northwest Territories.

The application to the Sahtu Land and Water Board (SLWB) requests regulatory approval to conduct year-round exploratory horizontal drilling, completion and flow testing for five years using two new all-season well pads, and water taken from both the Mackenzie River and a groundwater well.

SLWB executive director Paul Dixon said the board will decide whether or not to approve the application as is or refer it to environmental assessment by May 19. The application is open for public comment until Monday, Apr. 28.

The fracking would take place on Husky’s Slater River lease, located approximately 40 km southeast of Norman Wells on the west side of the Mackenzie River, where the company already has two vertical wellsites, a base camp, airstrip, winter access road, all-weather road and barge access.

If approved, the company plans to begin construction on the two new well pads this summer. The program is slated for completion by summer 2018.

Husky anticipates the drilling program will require a total of 29,240 cubic metres of water per year for two wells.

Contaminated waste water will be dehydrated onsite using “Clean Steam” technology, after which the concentrated wastes will be trucked or barged to licensed disposal facilities outside of the NWT. The cleaned water would then be returned to the environment.

“Using this process, a substantial amount of water is returned to the natural water cycle that would otherwise be disposed as waste,” the company wrote in its water licence application.

It currently conducts fracking operations in eight other project locations across Western Canada.

The Slater River lease is adjacent to ConocoPhillips’ drilling site, where the first horizontal fracking for shale oil was done this winter. Conoco plans to apply to drill up to 10 more wells on the lease over the next five years.

The NWT Chapter of the Council of Canadians, Alternatives North and Ecology North announced last Friday they will be pushing the SLWB to direct Husky’s application to an environmental assessment, urging others to do the same.