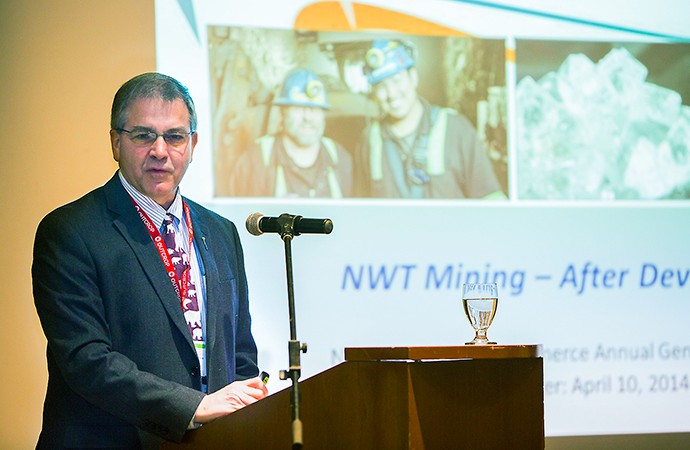 Advocates for mining and industry in the North say they are optimistic the transfer of resource control to the GNWT will mean more mineral investment in the territory, which has “languished” its resource potential for years.

The executive directors for both the NWT and Nunavut Chamber of Mines and the NWT Chamber of Commerce agreed the Apr. 1 signing of devolution represents the greatest step forward for the mining industry in the territory and will bring about a series of positive changes.

“Our mineral potential is just as good here as it is in Nunavut or Yukon, even better…but because of our regulatory complexities and land claims uncertainty, it’s chased away all that money so we’ve lost opportunities for jobs and business. We now have to get it back,” Tom Hoefer, executive director of the Chamber of Mines, told The Journal.

Hoefer met with the NWT Chamber of Commerce last week to share his thoughts on the changes that devolution will bring to the territory, which he says comes at a time when the mining industry is facing uncertainty and a lack of investment on a global scale.

“We’re going to have to work really hard now to convince investors, because we’ve had such a long string of years of uncertainty that they are going to have to see a demonstration of proof that things are different here,” he said.

According to Hoefer, mining investment in the NWT has been lagging behind other territories mainly because of regulatory uncertainty, the biggest of which included the absence of time limits on environmental assessments.

Facing a precedent of up to eight years for an environmental assessment, many companies dismissed the NWT and chose to invest elsewhere, he said.

Swept in on devolution’s omnibus Bill C-15 were changes to the Mackenzie Valley Resource Management Act that will see a mandatory two-year deadline for environmental assessments.

“That doesn’t mean that it’s less rigorous; what it means is the boards are going to have to have the capacity now, in other words the staff and the ability, to do that work in two years,” Hoefer said.

Still work to be done

According to Hoefer, there are a number of concerns yet unresolved in the NWT that present hurdles to mining companies, not the least of which is clarification on the extent of Aboriginal consultation.

Hoefer said Aboriginal consultation rights are still a grey area and have only been defined through court cases between Aboriginal governments and the federal government. Now that the duty to consult lies with the territorial government, rules need to be established, he said.

“We still don’t have clarity. We now have to wait for regulations to be developed, which is going to take who knows how long,” Hoefer said.

Mike Bradshaw, executive director with the NWT Chamber of Commerce, said another concern is clarification on what industry projects can be halted based on public concern.

“We are not saying that there aren’t any projects of public concern, but when you have no definition of what that means, even if your intervention is of little merit, as soon as you indicate that you believe it’s a project of public concern then the wheels grind to a halt. That just doesn’t make any sense. There has to be some criteria,” he said.

According to Industry, Tourism and Investment Minister David Ramsay, the GNWT will be looking to address both concerns in the future as it settles into its new role as resource landlord.

“We’ll look at legislative changes, policy changes, regulations, the whole nine yards. That will come in time. We’ve only had these new authorities for 11 days and we want to have the ability to grow into our new skin a little bit,” he said.

In the territorial budget released in February, the GNWT allocated $3 million to support the implementation of both the Economic Opportunities Strategy and Mineral Development Strategy, including funding to promote mining in the NWT: