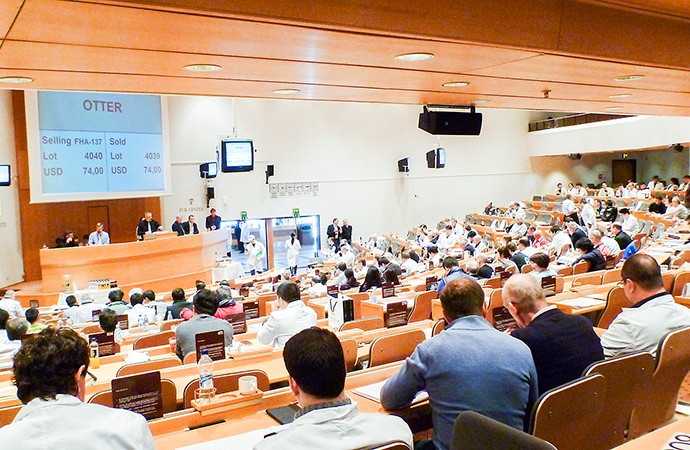 High quality furs from across the world are showcased at an international fur auction in Helsinki, Finland last March where NWT wild furs garnered the top overall prices.Photo: Francois Rossouw.

Wild martens trapped in the NWT were the star of an international fur action in Finland last month, fetching the top overall price, along with wild lynx, wolf and wolverine.

Representing NWT trappers, representatives with the Genuine Mackenzie Valley Fur (GMVF) program under the GNWT department of Industry, Tourism and Investment attended the auction in Helsinki in March, the first of its kind in terms of scale and representation from the world’s largest producers and buyers of quality fur products.

According to Francois Rossouw, a fur marketing manager for the GMVF who attended the auction, the NWT wild fur collection stood out against the best ranch fur in North America and Europe in terms of quality and interest.

“A lot of people were coming to see the wild fur,” he said. “Everybody is well versed in the ranch fur, in the mink and the fox, which is kind of boring. It’s beautiful, it’s uniform and it’s exactly the same as the next one. Wild fur, being what it is, is wild, so a lot of the folks wanted to come out and see it and check it out.”

Despite the popularity of the wild fur, overall fur prices were lower than what was seen last year and sales came up short of expectation, but Rossouw noted that 2013 was an “anomaly” year for the industry with some of the highest prices ever recorded.

Rossouw said geopolitical reasons can account for a lower number of sales than many producers were expecting, not the least of which is ongoing military and economic tensions between Russia and Ukraine.

Russia is one the GMVF’s main buyers and its spending power is mainly fueled by the country’s export of petroleum. With mounting international pressure to exert economic sanctions against Russia in response to its perceived military threat to Ukraine, the Russian market is coming up dry for fur retailers.

“We’ve been able to weather the financial downturns in the marketplace, but not when it comes to something like this. This geopolitical situation put a damper on things. A lot of people are in a wait and see attitude,” Rossouw said.

Another factor hindering sales is the Chinese enforcement of high import tariffs. Rossouw said China represents 80 per cent of the fur industry sales, however recent leadership changes in the country have cracked down on imports, enforcing high tariffs on manufactured goods.

Despite the drop in Russian and Chinese sales, Rossouw said GMVF delegates were able to secure 40 new clients for NWT furs, many of whom are from eastern European countries.

Rossouw will be attending a second auction in Helsinki this June and said he plans to take a sample of dressed furs to gauge buyer interest.

Industry Minister David Ramsay praised the GMVF program and its ability to give local hunters and trappers the opportunity to sell furs on the international market.

“The GNWT is proud to support the Genuine Mackenzie Valley Fur Program and to promote our NWT furs as some of the highest quality wild fur money can buy,” he said in a press release.

In 2002, the GNWT launched the Take a Kid Trapping program in response to declining numbers of trappers. Last year more than 3,000 youth went through the program.