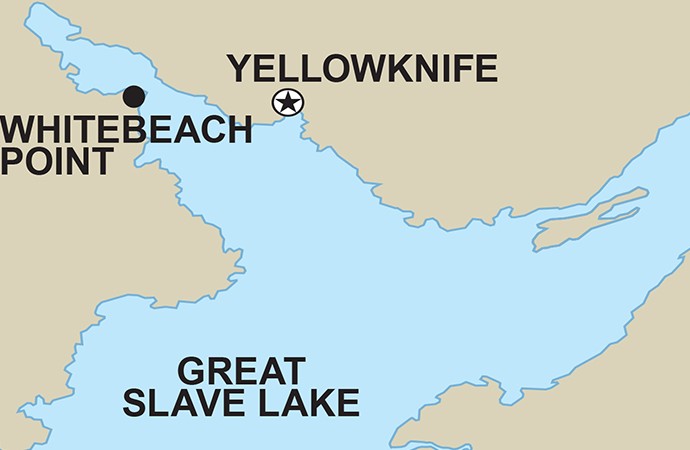 Whitebeach Point on Yellowknives Dene traditional territory holds some of Western Canada’s best silica for use in hydraulic fracturing, according to studies.Photo: Northern Journal.

Husky Energy may not be horizontally fracking near Norman Wells this winter, but the company already has its sights set on another Northern resource to help fuel its future shale oil exploration in the Canol play: sand.

The oil and gas company met recently with the chief and council of the Yellowknives Dene First Nation (YKDFN) looking to potentially access the high quality white silica found at Whitebeach Point on the North Arm of Great Slave Lake.

The area falls on Crown land within YKDFN’s asserted traditional territory, and contains a fine, quartz-rich sand considered ideal for use in hydraulic fracturing, an unconventional means of extracting oil and gas from shale underground.

Chief Ed Sangris told The Journal the company came to present at a council meeting earlier this month, but said no formal proposals or decisions have been made.

“They came and made a presentation, that’s about all they did. And we said just because you come here and talk to us doesn’t mean we give the okay; we have to consult our people, too, because the area is so significant to our traditional way of life. That’s the last place that is not being developed. We’ve been keeping industry away from the area,” Sangris said.

Councillor Bobby Drygeese said the area contains sensitive cultural sites and hunting grounds that need to be mapped and inventoried, and that any sand extraction there would need to be done with the permission of the First Nation.

“We told them there’s lots of historical sites there exactly where they want to put all that stuff,” he said. “We want to bring some elders and people there just to show them, go there on our own and take archaeologists and mark it out, save the things,” he said.

“Because there’s old wars and all that stuff a long time ago over there, old historical sites, and people still use that area for hunting. There’s old cemeteries there, too, so people go there to clean up old burial sites and stuff.”

Apart from the value to the Yellowknives membership, Sangris said YKDFN also wants to ensure they are being respectful of other Aboriginal governments who would be affected by the decision.

“There’s a lot of controversy, right, about fracking, and we have to consult with the Tlicho, with the Sahtu and the Dehcho. Because we don’t have any fracking in our traditional area, if we give the okay it’s going to affect other people in other regions. That’s what we are concerned about,” Sangris said. “Now we’re just in the process of talking to the other regions to see how they feel and then we’ll give our decision to Husky Oil.”

The chief said Husky did not make mention of what the extent of the operation would be, but did indicate that the sand is a highly coveted alternative to the sand they would have to import from the United States to do fracking in the Sahtu region.

“They don’t even know themselves what is out there; they want to do exploration to see if it’s a large area or a small area,” Sangris said.

Husky spokesperson Kim Guttormson said YKDFN is just one of several stakeholders with whom the company is engaged. She said the talks are preliminary.

“We are in the very early stages of evaluating potential sources of silica sand to support our exploration activities and have been having meetings with stakeholders to discuss next steps,” she told The Journal in an email.

“A site on the northwest arm of Great Slave Lake is one of several potential sites we are evaluating. More field work needs to be done to determine if the sand is suitable and we will work closely with all stakeholders and provide more information as the project is advanced.”

Guttormson would not say who else the company was in talks with or what other sites were being evaluated.

Husky withdrew its application to drill and frack up to four wells this winter on its Slater River lease near Norman Wells but is still planning to start work in the next couple of years.

Northern consulting company Aurora Geosciences conducted a report on the Whitebeach Point site in 2012, concluding that the silica could be used for industrial projects in the NWT and is high enough grade to be sold across the country.

Whitebeach Point is just one of several sites identified in the report, which notes similar sand deposits in the Liard River valley and along the Mackenzie River.