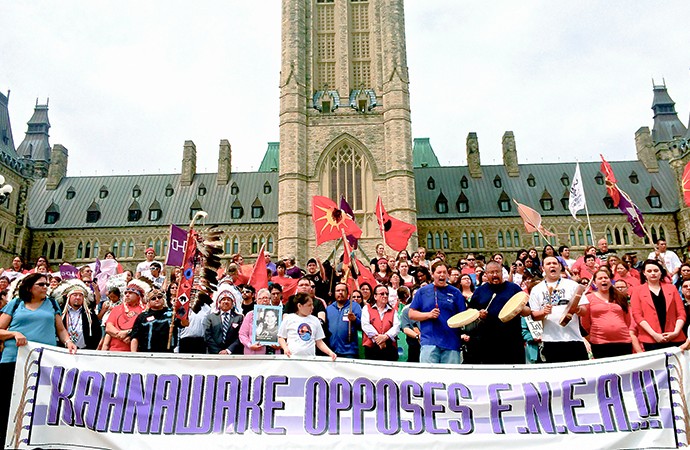 Aboriginal protesters gather on the steps of Parliament Hill last Wednesday for the National Day of Resistance against the federal government’s First Nations Education Act and lack of action on the growing count of missing and murdered indigenous women in Canada. The protests came just days after the UN released a report on the status of Aboriginal people in Canada.Clayton Thomas-Muller, Idle No More.

A new report from the United Nations released last week is calling for better consultation and the full consent of Aboriginal peoples before approving resource extraction projects in Canada, but a second perspective is saying such “rigid” requirements are not actually part of Canadian law.

Dwight Newman, the Canada Research Chair in indigenous rights and constitutional and international law at the University of Saskatchewan, says Aboriginal governments opposed to proposed pipelines, mines and drilling on their territory do not have veto rights when it comes to approving said development.

“Many believe the duty to consult provides a veto over development proposals, while the courts have consistently reiterated that it does not,” Newman wrote in The Rule and the Role of Law: The duty to consult, Aboriginal communities, and the Canadian natural resource sector, a new paper for the Macdonald Laurier Institute published just days before the report by UN Special Rapporteur on the rights of indigenous peoples, James Anaya.

“What the duty to consult does is provide protection for key Aboriginal interests, and create a lever to cause Aboriginal communities, government, and businesses to come to an agreement over resource projects that benefit all parties,” Newman concluded.

Released last Monday, the much anticipated report by Anaya advises the Canadian government to adhere to international agreements on indigenous rights by refraining from approving projects on lands subject to Aboriginal claims without adequate consultation or the “free, prior and informed” consent of the indigenous peoples concerned.

Based on information gathered in part during a visit to Canada last October, Anaya paints a picture of the country’s current state of consultation: one that is contributing to a troubling relationship between Aboriginal people and the Crown that has only worsened since the previous rapporteur’s visit in 2004.

“The Special Rapporteur repeatedly heard from aboriginal leaders that they are not opposed to development in their lands generally and go to great lengths to participate in such consultation processes as are available, but that these are generally inadequate, not designed to address aboriginal and treaty rights, and usually take place at a stage when project proposals have already been developed,” his report states.

“There appears to be a lack of a consistent framework or policy for the implementation of this duty to consult, which is contributing to an atmosphere of contentiousness and mistrust that is conducive neither to beneficial economic development nor social peace.”

While Newman agrees the situation isn’t always “rosy” between Aboriginal Canadians and the resource industry, his paper argues the assertion of consent embedded in Anaya’s report would “squander” Canada’s massive resource potential and the resulting economic opportunities for Aboriginal peoples.

In an interview with The Journal, Newman said the duty to consult is an important part of Canadian jurisprudence, but should be addressed based on its spirit, intent and capacity for relationship-building rather than seen only as a rigid legal framework that governments are forced to follow.

“The idea that free, prior and informed consent is required in every case of development of resources on traditional territories – that’s not really consistent with Canada’s duty to consult doctrine as it’s been developed, thus far,” he said.

“In terms of a consultation situation, it may not be helpful to start off by thinking, ‘What does the law require? Let’s do that.’ Focusing on the minimum legal requirements is not necessarily the best practice so much as trying to focus on relationship building from all sides and trying to find ways to further what will work for everyone.”

Among the problems with the consultation process listed in the UN report, Anaya said First Nations are often “bombarded” with paperwork, too short of timelines, the burden of proof with respect to impacts on their rights, and are forced to present their concerns to review panels that have little understanding of Aboriginal law.

In addition, he points to the emerging trend of industry organizing the consultations, rather than the Crown.

“The federal government has acknowledged that it lacks a consistent consultation protocol or policy to provide guidance to provinces and companies concerning the level of consultation and forms of accommodation required by the constitutional duty to consult,” he wrote.

Though Aboriginal people potentially stand to gain from resource development within their territories, Anaya emphasized that they simultaneously face the highest risks to health, economy and cultural identity from the associated environmental impacts, and that the long-term interests of indigenous peoples often don’t easily fit into the plans of industry, especially when backed by provincial and federal governments.

He said development projects must be fully consistent with Aboriginal and treaty rights and, as much as possible, allow for indigenous control over and benefits from extractive operations within their lands.

Larry Innes, a lawyer who specializes in Aboriginal and environmental law at Olthuis Kleer & Townshend, said though he agrees with Newman that duty to consult shouldn’t be viewed in terms of minimum legal requirements, he said it remains the law for an important reason: because a power balance exists whereby public governments push for resource extraction regardless of the special constitutional rights that Aboriginal people hold.

“(Newman) is coming from a perspective of naivete in expecting that governments and industry will act honourably towards First Nations when the past 250 years suggests the exact opposite,” Innes said. “It’s an argument for the status quo that ignores the fact that the status quo has been anything but kind to First Nations and their economic interests.”

Though Newman’s report turns to the Fort McKay First Nation repeatedly as an example of an Aboriginal government getting what it wants from the industry that surrounds it, Innes noted that the First Nation just very recently dropped a massive court case against both the Alberta and federal governments and Brion Energy that it used as leverage to secure greater environmental protection in relation to a proposed oilsands project on its territory.

“To pretend that there’s not a power imbalance and to then suggest that the duty to consult should be interpreted as something other than the law, which it is, is to suggest that First Nations should simply stand aside and allow development to occur in the public interest, as defined by everyone else,” Innes said.

He said duty to consult is extremely important for true nation-to-nation reconciliation with First Nations in Canada.

“If reconciliation to some means First Nations agree to have their lands and resources taken up by government and industry for the benefit of ‘all Canadians,’ then it’s not a right at all; it’s simply another sacrifice on the part of First Nations.”