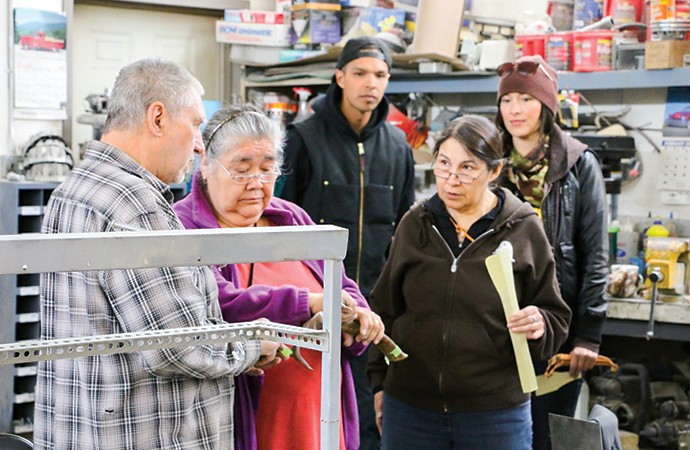 Antler, wood, steel and traditional knowledge fused last week in Whitehorse, where a group of aspiring and practicing hide tanners from the NWT ventured to learn the art of traditional tool making in the workshop of a practiced expert.

With the goal of “reconnecting to the land and culture,” 10 individuals from communities throughout the NWT met with artist George Roberts last week at his workshop to make scrapers and knives – precious resources for being on the land, hunting and tanning moose and caribou hides.

“A lot of us are learning to tan hides in the NWT, and what I found was that I didn’t have enough tools to tan hides, and most of the tools you have to make yourself because they’re pretty specific,” said workshop organizer Tania Larsson, a Gwich’in woman based in Yellowknife.

“Because the tools are so specific, it’s really hard to get a hold of any if you didn’t inherit some.”

Larsson said she had met Roberts several years ago at the Great Northern Arts Festival in Inuvik while she was first learning to tan moose hides and became enamored with the idea of creating her own tools. He thought holding a workshop would be a great idea and the two teamed up.

Over the five days, participants set out with the goal of each creating two tools made from wood, antler and steel – knives to be used for hunting or general bush living, and hide scrapers for tanning – learning to cut, grind and sand the materials using power tools. 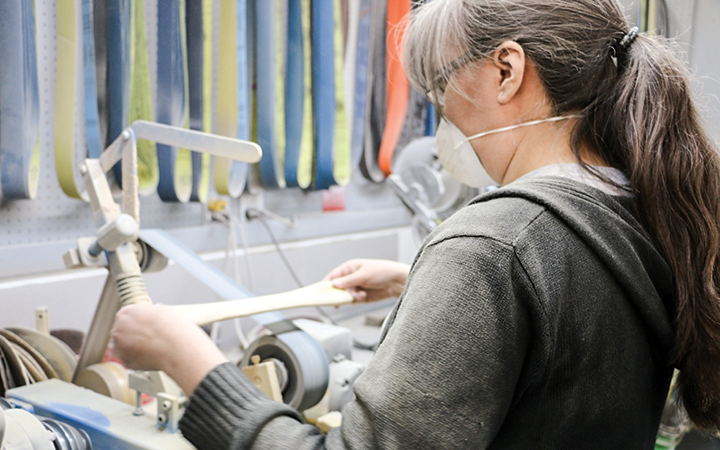 Stephanie Poole of Lutsel K’e sands down a scraper to be used for tanning hides.

Larsson said knowing how to properly make tools ensures they stay sharper longer, which makes the challenging process of tanning hides less discouraging for beginners and ensures the tools’ longevity.

Aside from a group of burgeoning young tanners, Larsson also invited her first tanning teacher Judy Lafferty and sister Lucy Ann Yakeleya – both elders from Fort Good Hope with valuable experience – to be part of the workshop.

Connecting to land and culture

Larsson, who spent a large part of her life in France, said she found her passion for tanning while on a personal journey to reconnect with the land and her Gwich’in roots following her return to the North.

“I found that tanning hide was one of the most effective ways of doing that. What I really wanted to do was make myself a pair of moccasins, but it was just so hard to find beautiful hide and it’s so expensive, so I said I just want to learn how to do it. That was about five years ago,” she shared.

Finding elders with the knowledge and spending time with them has been crucial for building those skills, Larsson said.

“Just being around elders with so much knowledge is a real blessing because they can teach you so much and all you have to do is give your time to them and you’ll get so much out of it.”

The process of tanning has also brought her closer to the land, she said.

“I realized that once you’re out there working with the moose hides, you also have to know which wood to pick up to smoke the hides, how to go in the bush to find the raw materials. Your respect for the land grows, and your appreciation for it.” 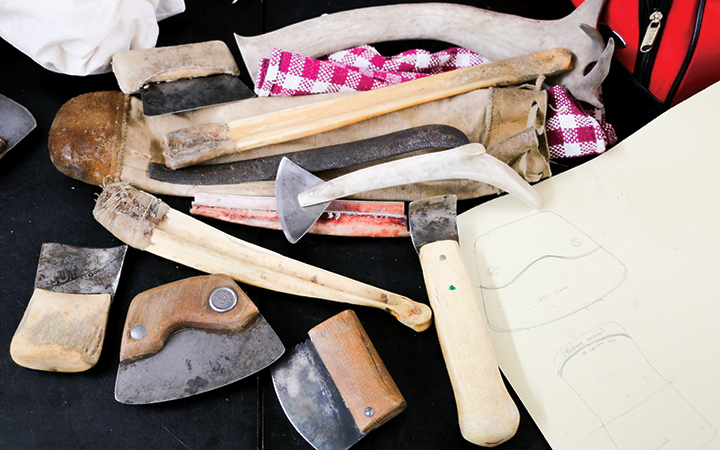 Students made a variety of cutting and scraping tools to be used for tanning hides.

The tool-making workshop was the first activity to be organized officially under the auspices of Dene Nahjo (“our way of life”), a new grassroots organization of young indigenous and non-indigenous Northerners interested in developing a new generation of leaders and community builders through the guidance of elders.

“We wanted to do cultural revitalization and promote leadership in young people, with the whole culture of respecting your elders and connecting to the land and being part of your community, and also maybe starting some political engagement for young people,” Larsson said.

With their inaugural activity successfully completed, members of the group are now moving on to the 8-Miles site near Fort McPherson this week to tan caribou hides for three weeks.

“We wanted to do a workshop that was outside of Yellowknife so we could connect with elders in the Gwich’in region and learn how to tan caribou hides, because mostly people have been tanning moose hides so far,” Larsson said.

Others, such as Stephanie Poole of Lutsel K’e, will be taking her new skills and tools home for a community moose hide tanning workshop in early June, Larsson said.

The final initiative underway by Dene Nahjo is a Northern leadership conference for indigenous women, planned for this November in Yellowknife.

“It’s going to be a series of leadership and capacity-building sessions organized for establishing emerging indigenous women leaders in the circumpolar world. So we’re going to be focusing on issues that are important to us and to our communities, and that will help to create a network of leaders and change-makers,” Larsson said.

For more information on Dene Nahjo and its activities, visit denenahjo.com or email contact@denenahjo.com