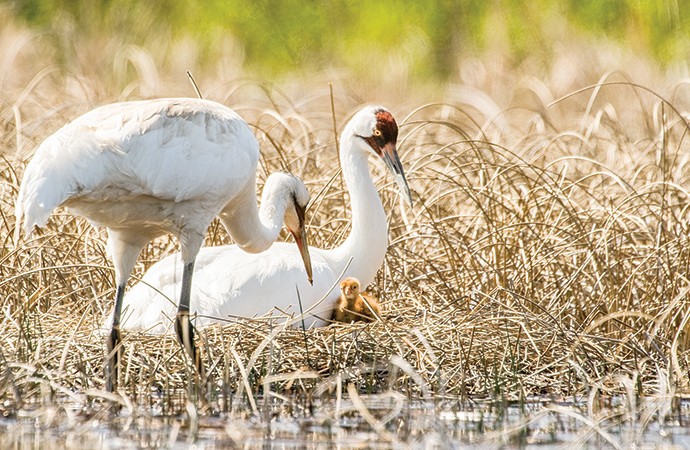 A record 82 whooping crane nests were counted in an annual survey around the Wood Buffalo National Park region. The record marks a victory for a number of conservationist groups fighting to save the endangered species.Photo: Klaus Nigge.

An annual survey tallying nests of endangered whooping cranes in and around Wood Buffalo National Park (WBNP) has been completed and the final results are record-breaking.

This year, 82 whooping crane nests were counted, up from 74 discovered this time last year. This number surpasses a previous record of 76 nests, set after a survey conducted in spring 2011.

“The general trend is for the number of nests to be increasing year after year as the population grows,” said Mark Bidwell, a species at risk biologist with the Canadian Wildlife Service.

While Bidwell and his colleagues at Environment Canada and Parks Canada were delighted with the increase in nests discovered, they weren’t surprised by the results.

“On the same survey last year we observed a large number of pairs of whooping cranes without nests,” Bidwell said. “It is likely that some of the pairs were too young to breed last year…and some of those pairs that didn’t have a nest have come into the breeding population this year.”

Aside from the record-breaking number of nests located, surveyors also noted an increase in nests found outside WBNP. A total of seven nests were seen outside the park’s border, with five to the north and two on Salt River First Nation reserve land.

According to Bidwell, one of the nests found north of the park is in a location historically unvisited by whooping cranes.

“This is actually quite an exciting result because it highlights the range expansion that we have observed in recent years,” Bidwell said. “Cranes have been expanding their territories into new areas within the park but also outside the park. That range expansion means we’re seeing cranes using bigger areas and more extensive areas than we have seen before.”

A success story for conservationists

According to Bidwell, these nest surveys have been conducted over four decades. In that time, bird enthusiasts and conservationists have watched the wild whooping crane population soar to over 300, based on studies completed by the US Fish and Wildlife Service.

At their lowest point in the early 1940s, there were as few as 16 whooping cranes in total. The birds were officially declared an endangered species in 2000.

The population of whooping cranes that visits WBNP is the only self-sustaining group of whooping cranes in the world. After waiting out the winters at a wildlife reserve in Aransas, Texas, the cranes fly to their nesting grounds in the northeastern section of WBNP, west of Fort Smith, for the summer.

Next survey to be done in late summer

Within the next few weeks, whooping crane chicks will be hatching from their nests.

Sometime during late July and early August, surveyors from all the partnering organizations will return to the park to conduct a productivity or chick survey.

The goal is to measure how many chicks have survived to become fledglings, an age where they can fly and could conceivably survive the entire migration to their winter home.