From the ashes rises the morel mushroom 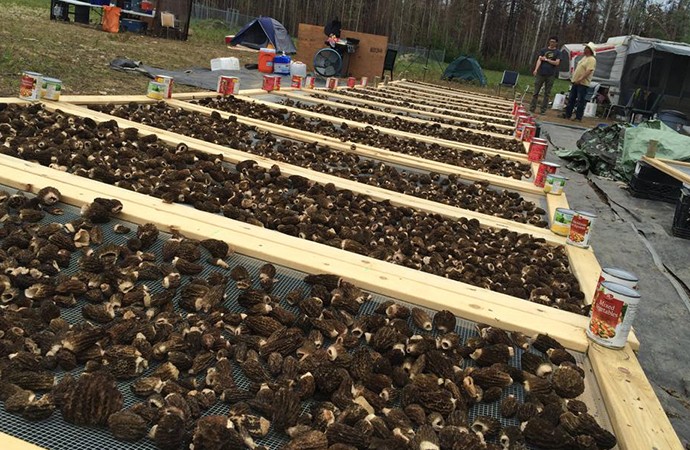 Rare and expensive morel mushrooms are set out to dry during a harvesting workshop in the Dehcho region.Photo: Riel Stevenson-Burke.

There can be big money in morel mushrooms, a gourmet treat served at high-end restaurants internationally, and folks in the Northwest Territories are hoping to capitalize.

Hosted by the department of Industry, Tourism and Investment (ITI) throughout the Dehcho region, residents took part in a series of workshops on morel mushroom harvesting, storing and marketing last week.

Michael Mageean, regional superintendent for ITI in the Dehcho, said the massive 2013 fire near Jean Marie River and Sambaa Deh coupled with the spring weather appears to have created perfect conditions for growing morel mushrooms this year.

Chief Stanley Sanguez of the Jean Marie First Nation was the first to have the foresight to take advantage of the opportunity, contacting ITI and establishing workshops during the winter months, before the mushrooms had even started growing.

“We spoke to other communities, and sure enough there was genuine interest in learning about mushrooms, the morel mushroom economy, from Jean Marie, Fort Simpson, Fort Liard and Wrigley in particular,” Mageean said.

The workshops have attracted about 100 participants eager to learn the ways of the morel harvester, who can make between $10 and $14 per pound of the fungi.

“The one in particular that generated the most responses was at Sambaa Deh Falls in the day-use area,” Mageean said. A series of information sessions were held there until June 8.

New opportunities are currently in the works, set to teach locals about other mushrooms that can be found in the region and their many properties.

The initiative reflects some of the main goals of the NWT Economic Opportunities Strategy, released in November 2013.

“Increasing the amount of local foods produced, harvested and sold in the NWT contributes to employment, investment and economic activity,” David Ramsay, minister of ITI, said in a press release.

“As we approach the prime picking season for morels and other species of wild mushrooms in the NWT, we are ensuring that residents and organizations are equipped with the knowledge and skills to take advantage of the opportunities that this unique harvest may bring,” he said.