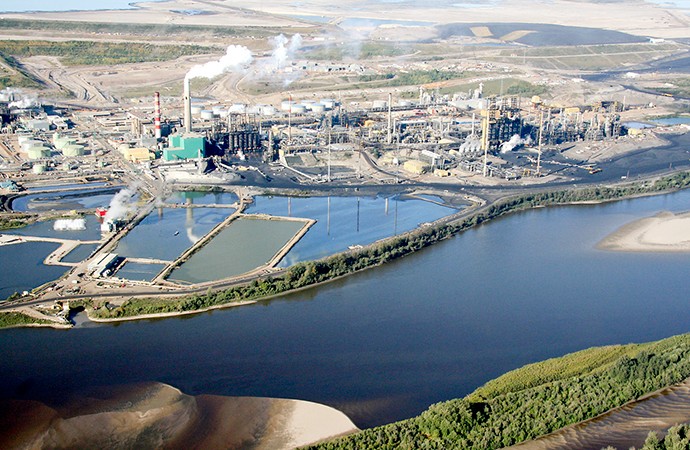 There is no evidence that Alberta's climate change strategy, which is intended to target large industrial emitters, will be successful in helping the province reach its emissions reduction targets, according to a scathing new report by Auditor General Merwan Saher.Photo: Global Forest Watch Canada.

Six years after the Alberta government released its strategy for mitigating climate change by reducing greenhouse gas emissions, the auditor general says it has “no evidence” the plan is meeting its targets.

The plan, unveiled in 2008, sets emissions reduction targets for 2020 and 2050, 70 per cent of which is expected to be met through carbon capture and storage. It also includes a law requiring large polluters to reduce emissions by 12 per cent or pay $15 for every tonne exceeding that target.

In his report, Auditor General Merwan Saher said the provincial government has yet to release a public report on the performance of the strategy launched in 2008, and only created an implementation plan for the strategy two years ago – a plan that has not since been updated, and has been “ineffective” in monitoring the performance of the government-funded actions to reduce greenhouse gas emissions.

“There is no evidence of regular monitoring of progress toward strategy targets between 2008 and 2012,” Saher wrote. “There is no clear link between the implementation plan and monitoring and reporting…The department has no clear guidance or effective monitoring to ensure strategy review deliverables and timelines are being met.”

The audit also found zero evidence of formal monitoring of the program by the steering committee or regular meetings between the committee and its working groups.

Even despite the lack of monitoring, Saher observed that the provincial government realized in 2012 that it wouldn’t be meeting its 2020 target. Though the province invested $1 billion in two carbon and capture storage projects, those are only expected to contribute total reductions of 3 megatonnes by the end of the decade despite the original target of 35 megatonnes.

“With only two carbon capture and storage projects planned, the total emissions reductions are expected to be less than 10 per cent of what was originally anticipated,” Saher noted.

The report advises the government adhere to repeated recommendations by the auditor general, which include creating and maintaining an implementation plan for the strategy that will meet the 2020 and 2050 emissions targets, and to somehow model its chosen actions to determine if they will actually achieve those targets.

The plan also needs to be updated annually and include the proper information to monitor progress.

“Without an implementation plan that includes criteria to select and evaluate actions, the government cannot know whether the actions it is funding will help Alberta achieve its targets to reduce greenhouse gas emissions and whether it is doing so cost-effectively,” Saher concluded.

Andrew Read of the Pembina Institute said the lack of action is “disappointing” but not surprising.

Read said while Alberta’s climate policy is currently focused on large industrial emitters, he said it leaves out possible reductions in the way Albertans use energy.

“As both the Canadian and Albertan governments are quick to point out, 70 to 80 per cent of emissions associated with oil comes from the final combustion of the fuel in our vehicles. It is therefore important for an effective climate policy to motivate people to change their habits when it comes to energy use,” he said.

Alberta, which is the only jurisdiction in North America without an energy efficiency program, is now considering one for residences, which Read notes could allow the province to achieve half of its 2020 reduction targets and save more than $1.5 billion per year in energy costs.