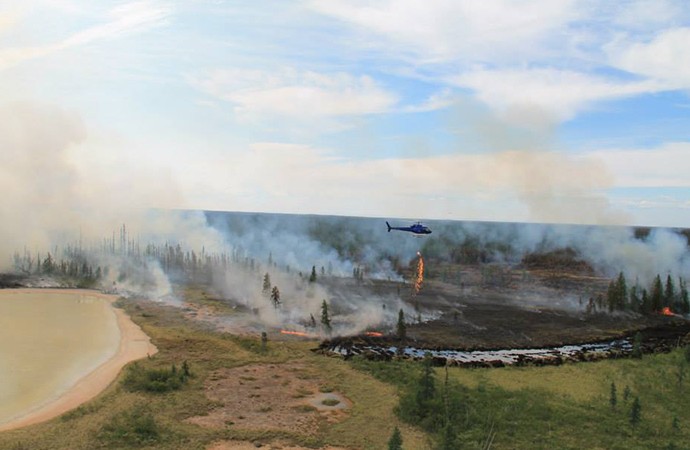 Helicopter and drip torch combine forces to tie in a section between two fire guards around the Kakisa fire, which stopped traffic for hours over the weekend between Behchoko and Fort Providence as it moved dangerously close to Hwy. 3.Photo: ENR/GNWT.

The NWT fire total for the summer of 2014 has topped 180 with a lot more projected in the coming days as dry lightning goes to work on tinder fuels in extremely hot and dry conditions.

“I wouldn’t be surprised to see 50 more new fires in the next few days,” projected duty officer Rick Olsen at the Environment and Natural Resources (ENR) Fire Management headquarters in Fort Smith on Monday. “Lightning with very little rain is in the forecast.”

He said an estimated 850,000 hectares had burned to date – the halfway point of a “normal” fire season. ENR fire crews, bolstered with crews from three other provinces, are taking action on a number of monster fires.

Many of them are growing together into mammoth fire “complexes,” Olsen said.

Action on fires with burnouts and/or heavy equipment include:

Olsen said the big fire burning along Highway 3 east of Providence, cutting off access to Yellowknife and threatening the fibre-optic communication line to the capital will take some time to remove as a threat to road traffic.

He said they are not able to do any back burns until the winds change, but will go to work on that fire as soon as they have opportunities.

“Co-operation from Mother Nature would help,” he said.

Traffic to Yellowknife was backed up over the weekend, sometimes for hours, due to intermittent road closures resulting from the Kakisa fire, filling the Snowshoe Inn to capacity in Fort Providence on the weekend while residents offered a bed for the night to friends and acquaintances who showed up at their door.