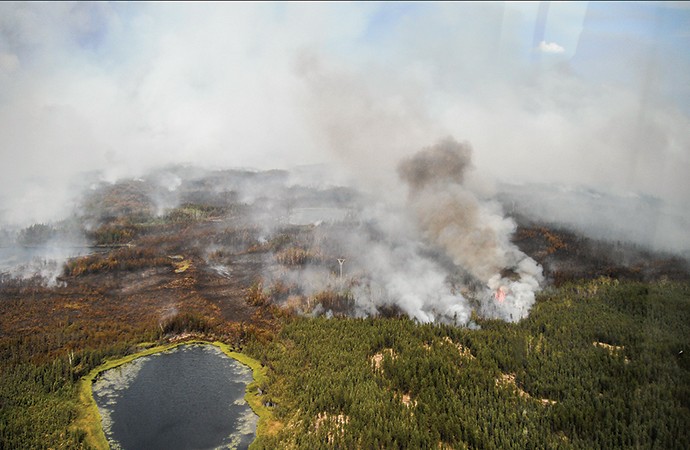 A fire burns near Behchoko to the west of Yellowknife. Fires around the capital have filled the city with smoke for weeks, often ranking extreme in terms of poor air quality.Photo: NTPC.

Surrounded by fires and subject to oppressive smoke daily, fire fatigue is taking a toll on residents of Yellowknife, with no end to the vicious fire season in sight.

The city has been isolated by fires for two weeks now with those driving in, including supply trucks, waiting sometimes more than a day in long lineups. Anyone leaving the city typically faces road closures, having to wait anxiously before making a mad dash when the wind changes and allows visibility before the smoke closes in again.

The department of Transportation again closed Hwy. 3 on Monday – a decision, staff said, that will not be re-assessed until Wednesday morning.

Motorists who venture down the highway describe driving through the experience as “eerie and surreal, like driving through a tunnel with darkness all round.” That can mean threading through active fires with flames crowning in the coniferous forest on both sides of the road: “a frightening, unforgettable experience.”

Stressed from the threat of fires on all sides, residents complain that the light is oppressive, at times dark and foreboding. The ever-present smoke on some days challenges breathing beyond the limits of what is deemed acceptable for human health.

As of Monday, 287 fires had been recorded in the NWT with over a million hectares burned. Typically the fire season tapers off by mid-August, but there is no predicting when it might end this year.

“We are by no means out of it. There could be a lot of fire season left if we don’t get rain,” Mike Gravel, territorial duty officer at the NWT Fire Centre in Fort Smith, told The Journal Monday.

In the North Slave, a new fire about 30 km west of Yellowknife and 9 km north of Hwy. 3 is being fought by 75 fire fighters from Ontario, Saskatchewan, Manitoba and the NWT. Crews have made “good progress” limiting fire growth towards the highway. Work continued on the south and southeast flank of the fire. There is old growth forest between the fire and Yellowknife, making it vulnerable and the target of “aggressive initial attack.”

Another fire about 90 km southeast of Yellowknife was started by lightning on July 21. Values-at-risk in the area include Blachford Lake Lodge and Avalon’s Nechalacho Project. The fire is “being held, but not under control.”

Massive fires in a giant fire “complex” between Behchoko and Fort Providence encroach on Hwy. 3 over a considerable distance. Extreme smoke conditions often result in zero visibility. Burnout operations have been carried out successfully on both sides of the highway to protect Fort Providence. Values-at-risk protection is underway on the west shore of Great Slave Lake.

Another massive complex east of the Ingram Trail continues to threaten Yellowknife, along with numerous homes and cottages, from the east. Crews continue to mop up the containment line along the south flank of the fire. This operation is “doing well and no issues are expected.” Containment lines on the northwest, south and southeast of the fire are holding.

An Incident Management Team is in place northwest of Whati, where two controlled burns were carried out successfully to protect the community from a raging fire complex and limit the landscape impact east of the community. The action taken “should definitely reduce the risk to Whati,” Gravel said.

Fire danger is high to extreme in the South Slave and Dehcho, as well. Several fires are burning in the Hay River, Kakisa and Enterprise area. All are under control or being held. One that started Saturday about 13 km east of the Hay River Reserve was attacked and crews are working on hot spots around the perimeter. Another fire is burning near Hwy. 5, 37 km west of Fort Smith in Wood Buffalo National Park near the Little Buffalo River Falls.

A new fire started up Monday about 10 km south of Jean Marie River. It is under initial attack by fighters and “will hopefully be held today and controlled tomorrow, if Mother Nature cooperates,” Gravel said. Another fire about 45 km south of Jean Marie River near Hwy. 1, is being held and crews are mopping up, while one near Blackstone Territorial Park has crews actively fighting it and “making good progress.”

No new fires have reported in the Sahtu or Inuvik regions.