Northern youth summer camps take off in the NWT 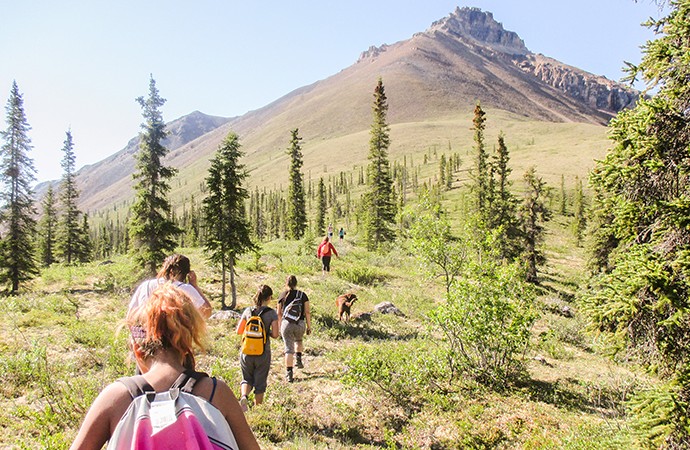 A group of 11 young women are learning to be leaders with the Mackenzie Mountains as a backdrop this week, after the first of three summer camps from Northern Youth Leadership launched earlier this month.

The camp for 11 to 14 year-old girls across the territory is being held at Gana River Lodge on Palmer Lake in the Sahtu region.

Lodge owner Harold Grinde offered up Gana River for free to Northern Youth, a generous and much-needed contribution, Jill Gilday, director of the not-for-profit organization, said before she left for the camp Friday.

The youth will be hiking, canoeing, fishing and participating in other cultural activities for a full week, all while developing leadership skills and having unplugged fun on the land.

Northern Youth will be holding an all-boys camp this July as well, which will be led by Hay River fisherman Shawn Buckley along with elder Elizabeth Buckley.

“(Elizabeth Buckley) will be really neat because she raised her family on the lake, and we’ll be spending the week learning all about fishing; everything from fishing with nets to sport fishing to line fishing and then filleting, drying, smoking and the whole process,” Gilday said.

The third and final camp is for girls aged 14-17 and will be a week-long canoe trip from Behchoko to Yellowknife along the North Arm of Great Slave Lake. This camp will be designed to teach youth how to run their own canoe trips.

“In the past we’ve had a lot of girls express interest in becoming leaders for Northern Youth. Some of our most experienced leaders are going to walk the girls through a canoe trip from beginning to end, so the planning stages, how to organize the food and what sort of stuff the leaders need to think about like navigating and safety,” Gilday said.

Spots are still open for both the all-boys and girls leadership training camps, which will both be held later in July.

This summer’s programming is nailed down, but come fall, Gilday said she will need to take a serious look at how the organization is funded.

Much of Northern Youth’s budget comes from the GNWT through its wellness fund. With the decentralizing of the fund to better support regional programs, the territory-wide youth organization no longer falls under its purview.

“We’re losing our core funding and will have to look outside, be it corporate or different government departments. We are going to have to really look at finding new partnerships,” Gilday said.

“It’s a tough environment for non-profits right now,” she added.

Northern Youth charges $100 per youth for its camps, which is a heavily subsidized cost that doesn’t fully cover the expenses of each camper.

The NWT organization recently joined with Tides Canada, a non-profit foundation that will relieve many administrative duties.

“With me as the only Northern Youth staff, I get access to HR professionals, legal professionals, people who write contracts and people in finance, so it’s a real benefit for us,” Gilday said.