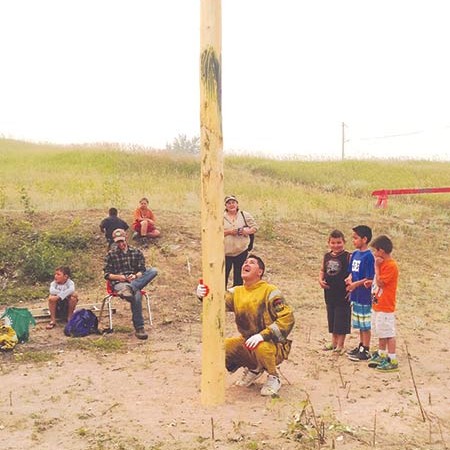 Darwin Tourangeau tries his hand at climbing a greased pole in an attempt to capture the cash prize at the top, one of the main events at Fort Chipewyan’s Heritage Day, hosted by the Bicentennial Museum on Aug.4. The annual event is a celebration of the area’s history, with Aboriginal and non-Aboriginal groups alike hosting cultural activities throughout the day.Photo: Pam Gibot.

Due to upgrades earlier this year, Northwest Territories RCMP are notifying the public of issues with their phone system when dialing the Operational Communications Centre (OCC). The issue occurs when no one is available to answer phones at individual departments and calls are relayed to the OCC located in RCMP G Division headquarters in Yellowknife. Due to an upgrade to the phone system earlier this year, the phones may not sound like they are ringing to the caller. RCMP want to reassure the public that those calls are getting through and officers do hear audible indicators on their end of the line.

The deputy minister of Human Resources for the NWT, Sheila Bassi-Kellett, has been removed from her position. As of yet, no reason has been given for her dismissal. The long-time government employee was appointed to the job in November 2011, after previously holding the position of associate deputy minister. In the meantime, Michelle Beard, director of Corporate Affairs with the territorial government, has taken over the position for an undetermined amount of time.

Sahtu Secretariat suing feds over land and water board mergers

Following the Tlicho government’s lead, the Sahtu Secretariat and the Sahtu Dene Council announced last Wednesday at their annual general assembly that they plan to take the federal government to court over its amendments to the Mackenzie Valley Resource Management Act, which will merge the regional land and water boards of the NWT into one superboard. The regional boards, responsible for reviewing mining and oil and gas development proposals, were established through negotiated land claims and self-government agreements. The court documents are to be filed later this month.