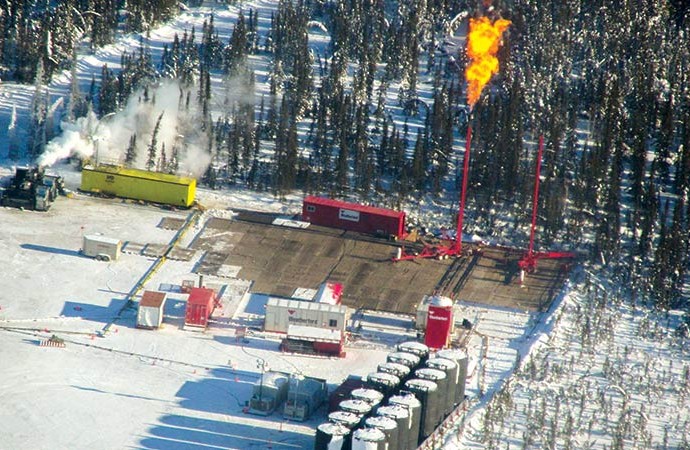 ConocoPhillips flares at one of its fracking sites in the Sahtu last winter near Norman Wells.Photo: Roger Odgaard.

Dene and Métis in the Sahtu settlement region are calling on their leaders and the government of the Northwest Territories to conduct a comprehensive review of the potential risks and benefits of hydraulic fracturing in the region rather than considering applications on a case-by-case basis.

A resolution passed at the Sahtu annual general assembly two weeks ago asks the Sahtu Secretariat Inc. (SSI) and GNWT to establish a joint commission to review the “technical, environmental, economic and regulatory aspects” of fracking, as well as the technical capacity of the GNWT in regulating and monitoring the unconventional oil and gas drilling practice.

“Having an environmental assessment of a single project in the Sahtu is not going to give people the answers that people need to understand the nature and extent of this industry that could be in front of them,” said NWT MP Dennis Bevington, who first brought forward the idea for a regional study at the assembly.

Bevington said it would make sense, if the Sahtu decides to head in that direction, to have the GNWT enter in as the proponent.

“They’re going into planning exercises for transportation; they’re looking at regulations for the industry; they’re doing a number of things that are directly related that may be as well interconnected,” Bevington said.

Right now, the federal minister of Aboriginal Affairs and Northern Development would be responsible for setting up a regional study, but that authority may be delegated to the GNWT as part of devolution, Cliffe-Phillips said.

Officials from the GNWT refused to comment on the matter before the resolution has made its way through the department of Aboriginal and Intergovernmental Affairs, though requests made earlier this year by members of the public and Weledeh MLA Bob Bromley to have the GNWT refer all new fracking applications to environmental assessment were rejected, with ministers stating they are confident fracking can be regulated properly on a go-forward basis despite it being a first-time affair for the territory and the new NWT regulator.

While a regional study could be done by the government outside of the regulatory process, Bevington said there are benefits to having an independent board conduct the review.

Daniel T’Seleie, a law student from Fort Good Hope who authored a petition earlier this year calling for a full public review of fracking in the Sahtu, said the proposal raised by Bevington would provide people in the region with a more comprehensive overview of the fracking process and its potential impacts than a one-project assessment.

“If approached properly, it would ideally give people a picture of what this fracking operation is going to look like, say 10, 20 years into the future,” he said.

Unlike in Fort Nelson, B.C., where T’Seleie said local First Nations were “steamrolled” by the fracking industry almost overnight, communities in the Sahtu want a clear idea of what could be coming down the pipe.

In the event of full-blown shale oil production in the Sahtu, T’Seleie said certain issues like toxic wastewater disposal, total water usage, infrastructure like roads and housing, and the possibility of a new pipeline will become imminent. He wants residents to be prepared for the possible cumulative impacts and scale of the industry beforehand.

“This is not part of the discourse, and the companies and the government are not bringing this up. They want to do it piecemeal, piece by piece, one water licence application at a time and not look at the big picture,” T’Seleie said.

So far, only one company has conducted horizontal fracking in the NWT, but that could change in the near future. ConocoPhillips, which fracked two wells in the Sahtu last winter, recently received permitting to drill up to 10 more wells in the region over the next five years.

“The way these things proceed quite often is that companies start to get their foot in the door and then things escalate, and before you know it, you could have hundreds of wells over there. Once they start building up infrastructure, once they start building wells, once they have their roads and their landing strips there, it’s hard to stop that once the ball is rolling,” T’Seleie said.