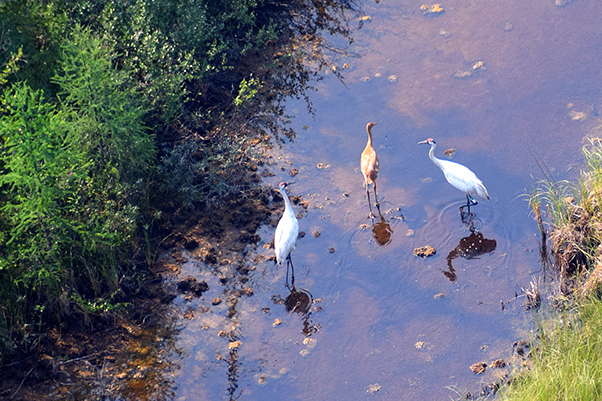 Biologists at Wood Buffalo National Park (WBNP) are wrapping up their annual research that looks into endangered whooping crane chicks born in the habitat year after year.

Recent aerial surveys conducted in August by the Canadian Wildlife Service (CWS), an arm of Environment Canada, show that slightly fewer whooping crane fledglings per nest were born this year compared to past mating seasons.

“Our main objective of this survey is to determine how many fledglings there are and compare that to the number of nests we observed earlier in the year,” said Mark Bidwell, a species at risk biologist and Canadian whooping crane recovery coordinator with CWS. “That gives us an estimate of the relative success that can be compared from year to year.”

The preliminary numbers are subject to change and are not low enough to cause alarm for conservationists, Bidwell clarified.

“An early look at the numbers shows that the survey crew counted 30 families of whooping cranes with 32 fledglings. The survey crew also counted 43 pairs without chicks and our preliminary analysis is that the number of fledglings per nest was about 0.39. That number is very close to last year’s result, which was 0.38.”

Bidwell said the numbers were in the normal range of variation for the species, which conservationists have been working to save since its population dipped to less than 20 birds the 1940s. Whooping cranes are protected in Canada by species at risk legislation.

The population now sits at over 300 birds, though Bidwell said their vast territory in WBNP makes it impossible to count the entire flock and account for this year’s juveniles.

Over the summer, the young whooping cranes spend their days enjoying healthy courses of wetland insects, small amphibians and occasionally rodents as they build their strength in preparation for their first long-haul migration to wintering grounds in Aransas, Texas.

“It’s really all about the adults making sure that the birds gain strength and size,” said Stuart Macmillan, manager of resource conservation for WBNP. “It’s important that the chicks learn to forage for themselves.”

The flock starts to take off on its journey as early as mid August, but it really depends on when the juveniles grow their long feathers and develop long-distance flying capabilities.

“It takes young whooping cranes between 80 and 100 days to be capable of sustained flight,” Bidwell said.

No impact from wildfires

Both Bidwell and Macmillan said that despite widespread forest fires that ravaged the park this summer, neither the whooping cranes nor their habitat were negatively affected. In fact, fires often refresh the birds’ ecosystem, drawing out and recycling nutrients in the ecosystem.

“We’re not too concerned about the impact of fire itself on the cranes and habitat because the cranes have evolved in this boreal habitat and landscape where the fire is going,” Macmillan said.

He said the only issues seemed to arise when crews attempted to conduct burnouts near whooping crane territory, disturbing the nesting birds at their most sensitive time of year. To avoid any tragedies, he said fire crews were instructed to use modified suppression tactics in those areas.