Walking With Our Sisters coming to Yellowknife 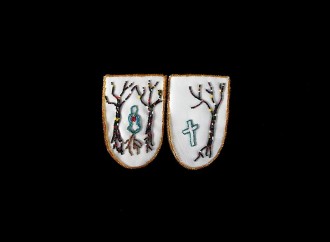 The art exhibit honouring missing and murdered indigenous women will stop in Yellowknife in the New Year as it makes its way steadily across the country.

Walking With Our Sisters, a commemorative art installation initiated by Métis artist Christi Belcourt, will be featured at the Prince of Wales Northern Heritage Centre Jan. 9-26, 2015.

The massive, collaborative exhibit features over 1,800 moccasin uppers remembering and bringing awareness to the lives of the nearly 1,200 indigenous women and girls who have been reported missing or who have been murdered in the past 30 years.

Nola Nallugiak, executive director of the Native Women’s Association of the NWT, said the art installation is a powerful way to bring to light a serious issue that many argue has not received adequate attention or response from media, politicians and law enforcement.

“It’s a very important social problem that needs awareness and needs a specific action plan to eradicate it,” Nallugiak said. “It should be concerning for all Canadians that this is happening, and I think it’s really great that Christi with Walking With Our Sisters initiated this. It’s a big deal. Everybody across Canada knows what it’s about; when they see the uppers coming to any community in Canada, they know what it’s for.”

While each community takes on the event differently, the format generally sees the moccasin uppers laid on the floor in a winding path formation. Viewers are invited to remove their shoes and walk alongside the vamps, each pair representing one woman.

The unfinished nature of the moccasins is meant to represent the way in which the women’s lives were cut short, while the 180 children’s uppers are intended to represent those who never returned home from residential schools.

Moccasin uppers by artists Melissa Hammell, Alexandrea Inglangasuk and Helen Knott, left to right, are three of the approximately 1,800 sets of unfinished slippers featured in the traveling Walking With Our Sisters exhibit, which honours missing and murdered Aboriginal women and children in North America.

“It’s like in the system they’re made invisible; it’s not addressed that they’re a group that’s targeted, that needs to be labeled a social problem,” Nallugiak said. “But even in their death they’re not invisible. The unfinished uppers clearly say that we’re gone but we’re still here and we’re not going to let this be until we’re addressed.”

Nallugiak said the conversation has just begun in Yellowknife as to what the community’s own event will look like, and will be guided by community members and elders to ensure it is respectful.

“It’s very much a grassroots community effort. Everybody in this process is equal, so everybody takes their hats off and nobody is above anybody else,” she said. “The elders are going to play a large part in determining how spiritually and with respectfulness that this is done in the Northwest Territories here.”

Nallugiak believes the exhibit will get the community talking about what needs to be done to address the issue of violence against indigenous women and girls.

“It’s quite a commanding presence when those uppers come to a community,” she said. “It has a domino effect where people start talking about it…and people get revitalized to do something about it.”

For more information or to get involved in the planning, contact wwosyk@gmail.com.