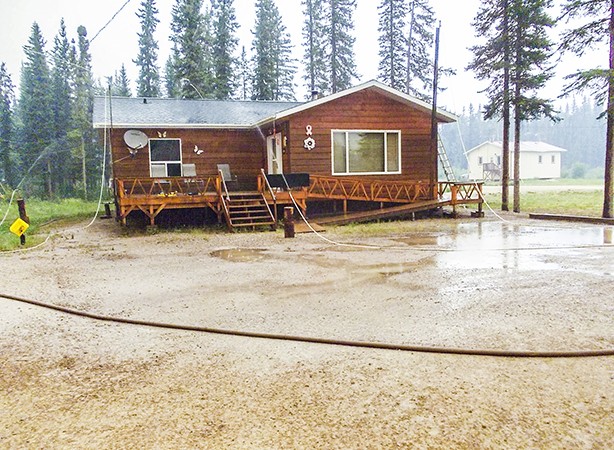 A home in Kakisa is watered down with sprinklers during the summer when a forest fire came within 100 metres of the community.Photo: Courtesy of ENR, GNWT.

Lloyd Chicot doesn’t need to be sold on the value of fire-smarting and community wildfire protection plans.

The chief of Kakisa saw flames burn within 100 metres of the community last July, only to be turned aside by fire crews and a fire guard cut over the last three years.

“The fire was crowning until it hit the guard,” Chicot told The Journal. “Without it, we would have lost houses.”

The close call was a lesson in the benefits of fire-smarting – a strategy of removing potential fuel from around buildings and communities. Chicot would like Kakisa to do more, but after a fire season that cost the territorial government more than $50 million, money is scarce.

“There is no pot of money,” Michael Miltenberger, minister responsible for Environment and Natural Resources (ENR), told The Journal when asked about financial support for community wildfire protection plans.

ENR began drafting protection plans in 2010 and redoubled its efforts after wildfires ravaged a corner of Slave Lake, Alta. in 2011. It now has plans for 28 communities in five regions, from Inuvik to Fort Smith and Yellowknife.

An informal survey of communities revealed that while the public has embraced the common sense tenets of the FireSmart program, a lack of money has stalled implementation of the wildfire protection plans.

Hay River and Fort Providence got help from ENR to construct fire breaks, but in Fort Liard, SAO Robert Firth said the community must rely on volunteer effort.

“We all want to make sure it gets done, but people are busy,” Firth told The Journal. “Maybe the past fire season will show everyone the benefit of fire-smarting the community.”

Yellowknife public safety officials found themselves on the hot seat this summer after exaggerated media reports claimed the capital was threatened by a forest fire burning 30 km west of the city.

Constructing a firebreak would take several years, Dennis Marchiori, the city’s director of public safety, told The Journal, but the public did not identify it as a priority during budget consultations.

“Fire-smarting the community was not raised during the public engagement process,” Marchiori said, and added that the issue could come up during budget discussions this fall.

In the meantime, Marchiori said he is reviewing emergency fire protection plans for vulnerable neighbourhoods with ENR.