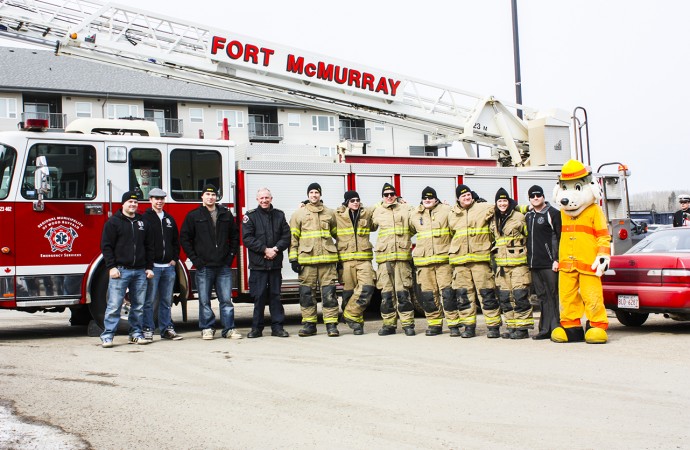 Sparky the fire dog visits with firefighters in Fort McMurray, part of the Wood Buffalo division.Photo: Courtesy of Regional Municipality of Wood Buffalo.

Volunteer firefighter departments from across the country are facing a shortage. It’s basic economics: when the majority of a labour force isn’t getting paid for the work they’re doing, it can be tough to create incentives to keep them around or find others to get the job done.

That’s why the Alberta Fire Chiefs’ Association (AFCA) set out to learn tactics to better recruit and retain their volunteers. Now they’re sharing what they’ve learned with the rest of the country.

At the Canadian Fire Chiefs Association (CFCA) conference, held Sept. 14 to 17 in Ottawa, the AFCA presented the various initiatives they’ve been using to strengthen their provincial force to a crowd of national fire chiefs. In response, fire marshals from across the country held an emergency meeting to create a resolution for their fire chiefs to adopt the AFCA’s strategies.

“We were pretty excited about that, that they would step to the plate that quickly and endorse what we were doing,” said William Purdy, executive director of the AFCA.

The strategies aren’t rocket science. It’s all about creating strong, effective communication within the community, and keeping crews interacting and involved, Purdy said. But for small departments almost entirely run by volunteers, the effort to ensure the initiatives are successful can be quite time consuming.

“In 2009 and 2010, we did some surveys across the province and determined that there was a real lack of volunteer people in some of our smaller communities,” Purdy said. “Some, even in the under 5,000 population, were having difficulties trying to keep a roster of say 15 to 20 people and a lot of the problem was there was no awareness of what the volunteer firefighters were doing and the value of them.”

Recruiting in the NWT

In Fort Simpson, four separate dumpster fires broke out at the same time at the end of April. Most were easy to contain but one fire did serious damage to the hamlet’s Northern Store warehouse, destroying groceries and other goods.

“It it was a pretty scary moment there for about a half an hour when everything was all kind of burning at once,” said Roger Pilling, the hamlet’s volunteer fire chief. “I’ve been on the department for about 25 years and I’ve never had more than one fire at once. We dealt with it the best we could. I’d love to have more people but we’re always after people, that’s one of the issues that’s common.”

The crew was able to tackle the simultaneous dump fires because they had enough members available to split into teams. But staff fluctuates throughout the year as members leave the community to work in careers outside the town limits, leaving crew numbers dwindling and the job that much more difficult.

While Pilling looks forward to possibly implementing new ideas to help his crew increase its 16 to 18 volunteers serve a population of about 1,200 people, he is skeptical that there will be real change, calling the task of recruitment a “never-ending process.”

Chucker Dewar, fire marshal for the territory, said studies similar to those in Alberta have been carried out with stakeholders in the NWT in 2010. With assistance from the Ontario Association of Fire Chiefs, a toolkit similar to the AFCA’s was developed and is now at the disposal of the territorial fire departments.

Dewar said he has plans in place to see whether any new strategies from the south can be used in addition to the current resources.

In the meantime, the crews of the NWT will forge ahead, doing dangerous work regardless of how many volunteers they have.