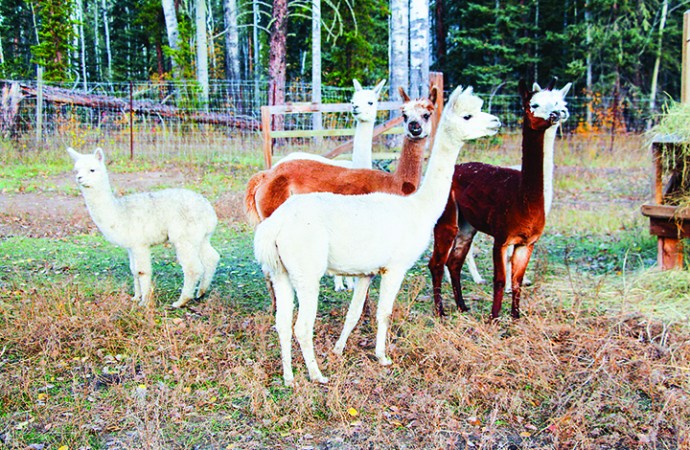 “Buddy”, the little guy on the left who was born in June, is the newest alpaca to join the herd at the Flat World Alpaca Farm near Fort Smith.Photo: Meagan Wohlberg.

And one more makes nine. The newest addition to the Flat World Alpaca Farm outside of Fort Smith doesn’t have a name yet, but the furry little alpaca known for now as “Buddy Whats-it” is getting settled in to his family of farm animals as they fluff up for the winter.

Buddy is the first male to be born in years at the acreage in Bell Rock, a set of wilderness estates located 13 km outside of Fort Smith, where the herd’s matriarch, Carmen, and her offspring have managed to birth female after female since the hobby farm was founded in 2007.

“I said to Helena, now we know where male alpacas come from!” said an amused Mike Couvrette, who owns the little ranch with his partner Helena Katz.

With Buddy’s fine wool flourishing over the winter, Couvrette predicts needles will be flying as devout knitters from Fort Smith, Hay River, Yellowknife and even one loyal customer in New Brunswick fight to call dibs on the yarn spun from the baby’s coat next spring.

Flat World, one of just two alpaca farms North of 60 in Canada, exports the high quality wool sheared from its animals each spring to a manufacturer in Edmonton, who then ships back skeins of 100 per cent alpaca wool to be turned into socks, sweaters and mittens by local crafters, along with heavy duvets.

Right now, two years’ worth of raw wool is in production, and people can’t wait for the finished product. Couvrette said the last of his stock was bought out months ago and people have been knocking down his door for more, which should be available by the large local Christmas craft sale scheduled for this November, along with ready-made socks and blankets.

“When we send it down, we have it bagged by individual animals, so we know which animal it came from,” Couvrette said. “People find that really unique, and also it sort of helps for the people who find they’re a skein or two short for making something. They’ll call us up, especially with the darker ones, because we do have different shades.”

Couvrette and Katz got into the alpaca business seven years ago after deciding their little acreage in the woods needed some livestock. Horses are a lot of work, so they decided on alpacas, which are low maintenance, can handle the Northern climate and have the wonderful output of high grade wool.

They have also been able to sell the manure to gardeners in Fort Smith, who use it as a fertilizer.

Most of the first generation have passed on due to old age, but Carmen and her offspring – and their offspring – continue to produce more with the herd’s three breeding males, once every year or two.

Couvrette said he’d like to see the herd expand a bit more, especially as he clears more land for roaming space. As he’s preparing for retirement next spring, he said he is also considering adding other species to his growing farm family.

“Don’t be surprised if you see chickens out here in the future,” he said.