Protesters march against fracking in Yellowknife 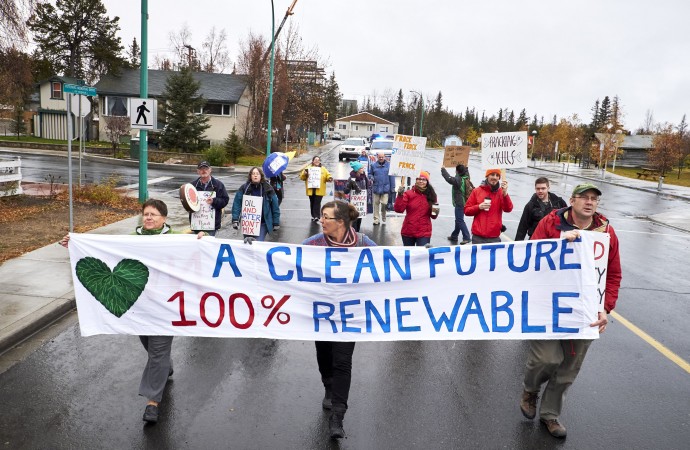 There might not be any fracking happening in the NWT this year, but that didn’t stop the industry’s opponents from making some noise on Saturday in Yellowknife as part of the worldwide Global Frackdown protest.

“There’s lots of testimony from around the world now, it doesn’t matter on the province or state or country, where many people are showing to the TV cameras now that they can set their drinking water on fire,” said Lorraine Hewlett of the NWT Chapter of the Council of Canadians, which organized the event.

“It’s really important to us to protect our water supply and protect the land, and to encourage governments to be 100 per cent renewable when it comes to energy, to get off of fossil fuels as quickly as possible and not go down this road of trying to use all the oil that’s in the ground. Because we won’t have a planet left if we burn all the oil that’s in the ground,” she said.

Around 25 people joined the Council of Canadians on the rainy Saturday to march from Somba K’e Plaza to Northern United Place to take part in an information session on fracking that included a screening of the documentary Showdown, which focuses on the ongoing anti-fracking protests in New Brunswick.

Fracking only recently came onto the radar of residents in the Northwest Territories, where ConocoPhillips did the first horizontal hydraulic fracturing in the Sahtu region near Norman Wells last winter.

Other applications by ConocoPhillips and Husky to drill more wells over the next five years were approved by the regional land and water board without referring them to an environmental assessment earlier this year.

Though neither company plans to do any fracking this winter, the approvals still angered those with concerns about the unconventional shale oil extraction method.

“We certainly can’t pursue the development of oil and gas at the cost of the environment, especially since the Northwest Territories has a large First Nations population where it’s traditional to live off the land, hunting moose and caribou…If your land is poisoned, then your food source is poisoned,” Hewlett said. 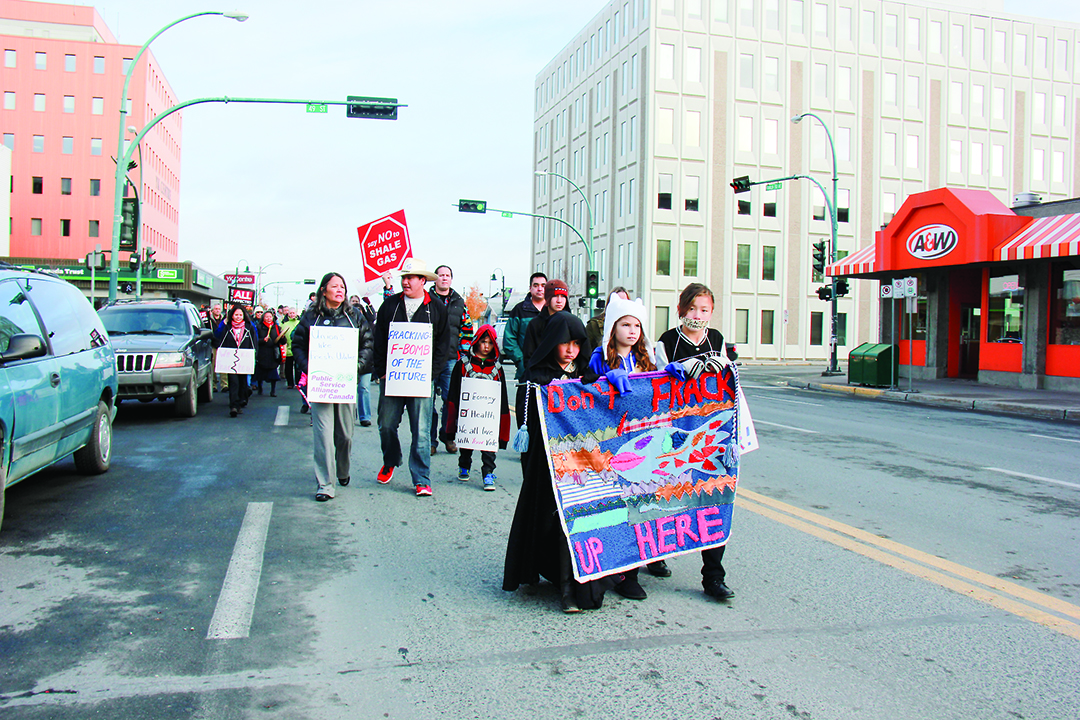 Yellowknifers march against fracking in the city’s first Global Frackdown protest last October. About 25 people turned out for this year’s march on Saturday.

Anti-fracking groups like the Council of Canadians have been criticized by some Sahtu leaders, including MLA Norman Yakeleya, who said it isn’t right for people outside of the region to interfere with matters related to the economy where unemployment rates are high.

“Yellowknife should mind their own business is what I think,” the MLA told The Journal again last week. “Don’t people realize that the anti-fracking groups keep people in a state of poverty?”

But Hewlett said it is the “minority” of people in the Sahtu who stand to make money off the industry who are in support of fracking, while the remainder remain uncertain or opposed to it happening on their land. She said the protest is a show of solidarity for those in the Sahtu emphasizing that other people in the NWT care.