Feds to change Aboriginal consultation regulations for the NWT 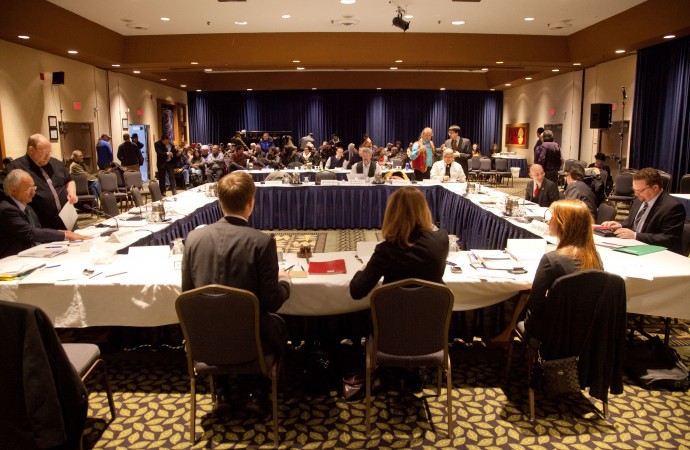 New regulations are being drafted to back up the recently amended legislation that controls the environmental review process in the NWT, and among them are new rules “to clarify roles and responsibilities for Aboriginal consultation.”

According to an Aboriginal Affairs and Northern Development (AANDC) briefing note secured by The Journal, the MVRMA amendments provide the minister authority to develop new regulations for consultation with Aboriginal governments that:

Though few details of the proposed regulations have been shared with Aboriginal governments, minutes from an initial teleconference on the new policy highlight concern among various First Nations in the NWT.

“K’atl’odeeche First Nation, as well as the Dehcho First Nations and the NWT Treaty #8 Tribal Corporation, noted their dissatisfaction with the consultation approach, with respect to the amendment of the MVRMA. They indicated that they did not feel AANDC consulted adequately, specifically noting that accommodations were not explained and the process has led to litigation,” the minutes from Sept. 30 read.

Peter Redvers, who is representing K’atl’odeeche on the file, called the previous consultations “a major failure,” considering ongoing litigation on the part of the Tlicho Government and Sahtu Secretariat Inc. over the elimination of regional land and water boards.

He said KFN hopes talks with First Nations around a new consultation policy will be more meaningful, and create a set of “practical but workable and strong regulations that will guide all parties in terms of subsequent consultations with Aboriginal governments.”

But in order to do that, he said, the Crown’s legal duty to reasonably accommodate concerns expressed by First Nations has to be central to the policy.

“Consultation does, where there is a potential for infringement, require accommodation, and certainly, there would be the expectation that any consultation process where an infringement has been identified would include some form of meaningful accommodative action by government,” Redvers said. “That needs to be clearly articulated within the consultation regulations.”

A first meeting to discuss the policy has been scheduled for January. Those being consulted on the new regulations include Aboriginal governments, the various boards established under the MVRMA, federal and territorial government departments and industry associations, including the Canadian Association of Petroleum Producers and the NWT/Nunavut Chamber of Mines.

The inclusion of industry, Redvers said, is a point of concern for Aboriginal governments. Though several First Nations requested that AANDC make the minutes of those consultations available for viewing, the department refused.

“There is some concern that Canada is consulting privately with industry on an issue of direct and immediate concern to First Nation governments,” Redvers said. “A number of the First Nation governments indicated that they’re fine to have their comments shared with others and keep it an open process. The issue is fulfilling a constitutional obligation; why would that need to be a secret process?”

New Aboriginal consultation legislation was recently enacted in Alberta, despite strong opposition from First Nations and Métis in the province who said the policy undermines their rights.

Under the new rules, Alberta set up a single window office with the power to decide what projects require consultation, which First Nations should and should not be consulted, what level of consultation is required and at what point consultation is sufficient.

Because the office is unequipped to deal with questions of constitutional law concerning Section 35 Aboriginal rights, First Nations and Métis in Alberta now must go through the courts to contest the adequacy of consultation.

She said most First Nations already have their own consultation policies, and is concerned those will be overridden by the new regulations.

“For the Akaitcho Dene First Nations, each of the First Nations has their own way that they are consulted. Some First Nations might want you to come into the community and have a meeting; some are very busy and might wait until you’re further advanced. So it’s not like there’s a blanket policy for Akaitcho, but we do uphold our indigenous rights: our rights to free, prior, informed consent,” Poole said.

Other regulations in development

Aboriginal consultation is only one set of new regulations stemming from amendments to the MVRMA and Territorial Lands Act. Other regulations in process concern administrative monetary penalties and cost recovery, as well as what AANDC terms as “minor amendments” to existing regulations on land use and water, preliminary screening requirements for projects and exemption list regulations.

Poole said the regulations could have significant impacts on the way projects are approved, such as the life of water licences, which could allow permits to last for the entire life of major projects like diamond mines.

“Those are not minor to us,” she said.