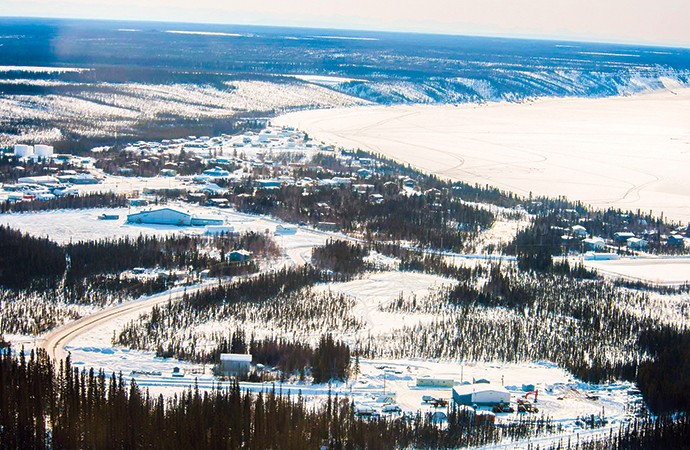 The Sahtu is officially looking into building a technical institute in the region to train and retain their youth for future job prospects.Photo: Jean Polfus.

Just as most students are wrapping up their exam season, packing up their books and heading home for the holidays, residents in the Sahtu are celebrating the possibility of having a new technical institute and research centre open in the region.

The department of Education, Culture and Employment (ECE) confirmed with the region’s MLA last week they had launched a Sahtu Regional Institute feasibility planning study, officially taking the first step towards opening a post-secondary facility for youth and those looking to upgrade their skills without having to travel too far from home.

The victory comes almost 10 years after discussions around having such a facility in the Sahtu began, said MLA Norman Yakeleya.

The study will examine the logistics of the new school, including possible locations, costs, course programming and potential partnerships.

The announcement comes at a time when students in the Sahtu are increasing their academic success, with statistics demonstrating that high school graduation rates in the area are on the rise. Between 1993 and 2013 a total of 354 students graduated from a secondary education institution in the region. In 2014 alone, 42 students received a high school diploma. Future projections predict an average of 50 graduates a year.

“We want to start utilizing more of our own people and develop their skills,” Yakeleya said. “The way things are going right now, not too many of our people now are going to be full-time trappers. There is still a core segment of people in our communities who are trapping…but we’re seeing more and more young people now who are staying close to the community and there’s jobs that need to be filled once some of the older workers get into retirement.”

Students looking to increase their marketability do have the option attending any of the Aurora College campuses in Yellowknife, Inuvik or Fort Smith, however, high living and travel costs provide insurmountable barriers for many, Yakeleya said.

“Airfare isn’t cheap and if you have a family of four or five it’s about a good $8,000 just to get home and back,” Yakeleya said. “That’s the airline ticket now from our small communities so around Christmas time thank God for the roads being punched through to Tulita and the other roads, at least students can drive…and reduce their costs.”

Filling needs of the region

In 2013, the Sahtu conducted an oil and gas study to examine the needs of the workforce. The findings showed a dearth of workers with adequate qualifications, including literacy and life skills, job readiness, a drivers license and a grade 12 diploma.

Yakeleya is dreaming big with the facility and hopes it can include non “cookie-cutter model” courses like environmental monitoring, firefighter training and trapper certification.

“The seeds that we plant we will reap tomorrow,” he said. “The seeds we are planting are the young people’s minds… For us leaders now, and the older people, we know our future is going to be okay because our young people are going to be given the skills of the trades that are going to be required for them, number one to be independent in their lives and not be dependent on government, and to know they can pass on their skills to their children.”

The feasibility study is expected to be completed by the end of March 2015.

“This is something that needs to continue on with the next government,” Yakeleya said.