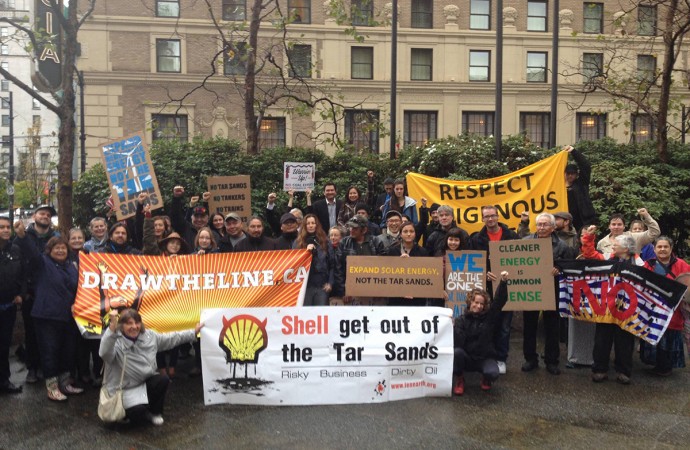 B.C. chiefs and anti-oilsands activists come out to support the Athabasca Chipewyan First Nation during its first morning of court in Vancouver on Oct. 15, where the First Nation appealed the federal government’s approval of Shell’s proposed Jackpine oilsands mine expansion project. The case was dismissed in December.Courtesy of ACFN.

The Mikisew Cree First Nation (MCFN) emerged victorious in its court case against the federal government over the lack of consultation on the sweeping legal changes couched in omnibus Bills C-38 and C-45, passed in 2013.

The Federal Court ruling found that Ottawa should have consulted the First Nation from northern Alberta before passing the two bills, which contained massive changes to environmental laws impacting everything from water to wildlife.

The two omnibus bills, which changed legislation on protection of waterways, fisheries laws and the environmental assessment process in order to “streamline” regulatory approval of resource projects, drew enormous criticism from First Nations and helped spark the Idle No More protest movement.

On Dec. 19, Justice Roger Hughes ruled that the federal government erred in failing to consult with MCFN before introducing the bills to Parliament, on the basis that the changes proposed would clearly impact constitutionally guaranteed harvesting rights.

In his 65-page ruling, he wrote that the Mikisew Cree should have been notified when the bills were introduced and should have been given time to respond; instead, “no notice was given and no opportunity to make submissions was provided. In fact, each bill, which was structured as a ‘confidence’ bill, went through Parliament with remarkable speed,” Hughes wrote.

Though the court did not grant the injunction requested by MCFN against the new laws created by the two bills, many see the ruling as having potential to modify future consultation by serving as a warning sign to governments that they can’t unilaterally advance laws that could impact treaty rights.

Ottawa has 30 days to appeal the ruling.

The outcome of the Athabasca Chipewyan First Nation’s (ACFN) own Federal Court challenge against the Canadian government produced much different results last month.

The First Nation took the Crown to court in October, appealing the federal approval of Shell’s proposed Jackpine oilsands mine, which falls on ACFN traditional territory.

ACFN argued that the Crown breached its duty to consult and accommodate ACFN’s treaty rights in approving the expansion, which would see the existing open pit mining operation increase bitumen production by 100,000 barrels per day, disturbing over 12,000 hectares of ACFN territory, including a 21-km section of the culturally and ecologically significant Muskeg River.

On Dec. 9, the Federal Court released its ruling affirming the constitutionality of the Crown’s consultation process following the environmental assessment of the mine expansion, signalling a legal dead end for the First Nation, who challenged Shell’s project at every available stage of the review process.

The court concluded that Canada had fulfilled its duty to consult and that the accommodations offered to ACFN were reasonable and adequate under the recently updated Canadian Environmental Assessment Act, one of the pieces of legislation modified under omnibus Bill C-38.

While ACFN had argued that the consultation process was rushed and lacked transparency, the court found the time period sufficient and the Crown’s conduct fair.

“The duty to accommodate does not guarantee Aboriginal groups everything that they wish to obtain,” Justice Danièle Tremblay-Lamer wrote in her ruling. “As the Supreme Court has repeatedly reminded us, Aboriginal groups must be flexible when discussing options for accommodation.”

While ACFN charged that the process lacked transparency, the court defended Canada’s right to keep its justification for approving the project private.

“The duty to consult obliged the Crown to justify its rejection of the ACFN’s position but not to disclose the explanation that it gave to the Cabinet for recommending approval of the Project,” Tremblay-Lamer wrote.
Still, the dismissal hasn’t deterred ACFN, who announced last week that Tremblay-Lamer’s decision has only further “fired up” the First Nation.

“Justice Tremblay-Lamar said she failed to see what more could be done, but we fail to see what was done,” responded Doreen Somers, IRC Consultation Coordinator of the ACFN Industry Relations Corp. “By focusing on the process alone she’s failed to uphold the promise of section 35 of Canada’s Constitution to make real and meaningful change in the lives of Aboriginal people.”

ACFN says it continues to explore other options for recourse on this and other matters pertaining to development on its traditional territory in 2015.