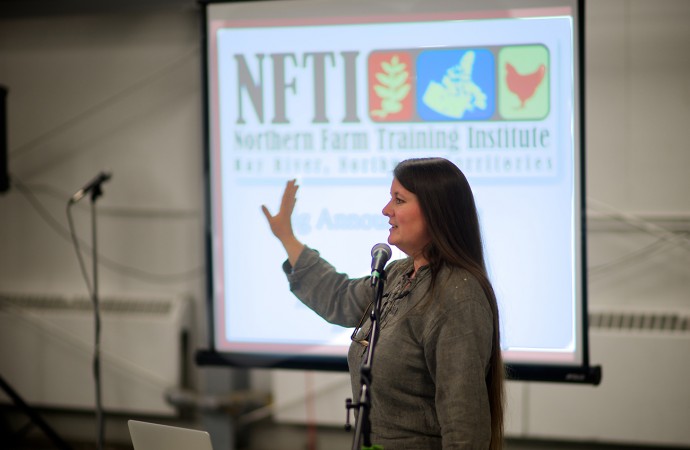 Northern Farm Training Institute President Jackie Milne addresses the public at the Soaring Eagle Friendship Centre in Hay River on Friday, where NFTI announced it has been selected to become Canada’s first training hub for the Savory Institute.Photo: Scott Clouthier.

Hay River, NWT will soon become the Savory capital of Canada. The community’s Northern Farm Training Institute (NFTI) announced at a public meeting on Friday evening that it has been selected as Canada’s first Savory Institute hub.

The Savory Institute, founded by biologist Allan Savory, is an international non-­profit organization which promotes preservation and restoration of the world’s grasslands through holistic management of livestock. A Savory Hub serves a training centre to help spread the organization’s techniques and philosophies worldwide.

NFTI’s application is the first from Canada to be selected.

The news feeds into the dream of NFTI president Jackie Milne, who was given a boost earlier this year when Prime Minister Stephen Harper announced $2 million in funding for the burgeoning agricultural campus during his visit to Fort Smith in August.

Milne said she first began following Savory’s work after she watched an inspiring TED talk about reversing the desertification of grasslands by introducing free range livestock. She then found out about Savory Hubs while browsing the Savory Institute’s website and made an 11th hour application.

“It was literally the night of the deadline and I applied,” Milne recounted to dozens in attendance at the meeting at the Soaring Eagle Friendship Centre in Hay River on Friday night.

After being contacted for more information about the NFTI program, she later learned her application had made it to the semi­finals of the competition. Eventually NFTI was chosen as a successful candidate amongst 70 groups worldwide that applied.

Milne said the scale of the accomplishment really became clear to her when she was on a conference call with the other groups also chosen to become Savory Hubs and NFTI was introduced as representing Canada.

“We got called Canada,” she said. “That was pretty cool.”

Hay River Mayor Andrew Cassidy thinks the town and the Savory Institute are certainly a match.

“It’s a pretty good fit – the Savory hub is going to be here in the hub of the North,” he said.

“Jackie’s dream is contagious,” he said. “It’s going through the Northwest Territories and a bunch of people are learning that they need to use sustainable development.”

Robert Hawkins, MLA for Yellowknife Centre, also made the trip down to be present for the announcement.

“Everyone’s looking at what’s happening here and saying, ‘We want to be just like Hay River,’” he said.

Milne was also able to give some details about the planned construction of an agricultural school on the outskirts of Hay River.

She said NFTI is currently in discussions with the town in regards to developing the site of a former hog farm along Highway 1.

“We’ve been given a two­-year period of time to work out the strategy for the land, developing it,” Milne said.

She said she envisions a teaching facility that will be able to house 15 or more students at a time. Facilities will include a state­ of ­the ­art barn, yurts for student accommodation and a large yurt to be used as classroom.

“This land could potentially be a farm for everybody, and that’s what I’d love to see,” she said.

In NFTI’s two years of existence, it has already put 52 people from all over the NWT through its programming, which covers subjects such as seed selection, planting, wild harvesting and how to apply for funding support.
“The goal is to select people that are going to be a champion when they return back to their community,” she said.

According to Milne, residents of the NWT currently spend $150 million each year on food, and almost all of that money goes south. By teaching people to farm their own food, Milne said NFTI can help transform the food system North of 60.

“Even if you could capture 10 per cent (of the Northern food market), just in Hay River, that would double our economic circulation,” she said. “It’s an industry that’s just waiting for us to tap into and it’s regenerative. It’s one of the best industries we can develop.”