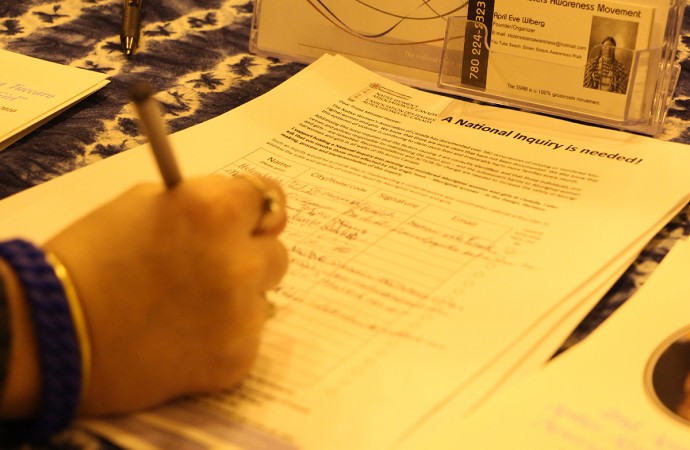 Guests attending a memorial for a murdered woman from Fort Chipewyan, Alta. sign a petition calling for an inquiry into the epidemic of missing and murdered Aboriginal women across the country.Photo: Dali Carmichael.

Calls to action on the epidemic levels of missing and murdered indigenous women in Canada have garnered international attention, most recently in the form of a report from a pan-American human rights watchdog.

The Inter-American Commission on Human Rights (IACHR) released a study just before Christmas with findings that demonstrate many Canadian government institutions are open to new strategies to address the issue, but that current structures prevent them from being successful in their endeavours.

According to Missing and Murdered Indigenous Women in British Columbia, Canada, indigenous women and girls in Canada have been murdered or have gone missing at a rate four times higher than their rate of representation, which sits around 4 per cent of the entire Canadian population.

While compiling their data through the Canadian government, NGOs, hearings and testimony with family members of missing and murdered women, the IACHR found the most reliable and comprehensive statistics had been collected by the Native Women’s Association of Canada (NWAC), not by any government agency. As of Mar. 31, 2010, the NWAC had gathered information on 582 cases of missing and murdered indigenous women from across the country in the last 30 years, though other civil groups claim the number to be well over 1,000.

The report focuses on B.C., which, at 160 cases, has the highest recorded rates of violence against indigenous women in the country. That said, many of the study’s general findings can be applied to communities and peoples nationally.

Information from the Canadian government indicated indigenous women are significantly overrepresented as victims of homicide and are three times more likely to be victims of more frequent and more severe forms of violence than non-indigenous women.

Qualitative research from the families of women and girls affected by violence show police routinely fail to adequately prevent and protect them from killings and disappearances. These families expressed that the extreme forms of violence against their relations were not investigated in a prompt or timely manner, nor with due diligence. In areas where multiple police jurisdictions overlap, like in Vancouver where the RCMP and municipal officers work in the same regions, the situation is even worse as bureaucracy often prohibits action.

The IACHR indicated that both government agencies and NGOs agree many root causes of the violence are related to a long history of discrimination in Canada that began with colonization and continues today through a series of inadequate and unjust policies and laws. One example provided is the Indian Act, which, by establishing Aboriginal people with Indian status, “restricted the freedom of women who identified themselves as indigenous to be recognized as such.”

The findings also point to the long living legacy of forced enrolment in residential schools as another damaging factor, because of its tendency to “separate indigenous children from their families, communities and cultural heritage.”

Among other suggestions, the IACHR adamantly recommended that the government provide a “national coordinated response to address the social and economic factors that prevent indigenous women from enjoying their social, economic, cultural, civil and political rights, the violation of which constitutes a root cause of their exposure to higher risks of violence.”

The IACHR is an arm of the Organization of the American States that promotes and protects human rights throughout the Western hemisphere.

To read the full document, head to http://www.oas.org/en/iachr/reports/pdfs/Indigenous-Women-BC-Canada-en.pdf