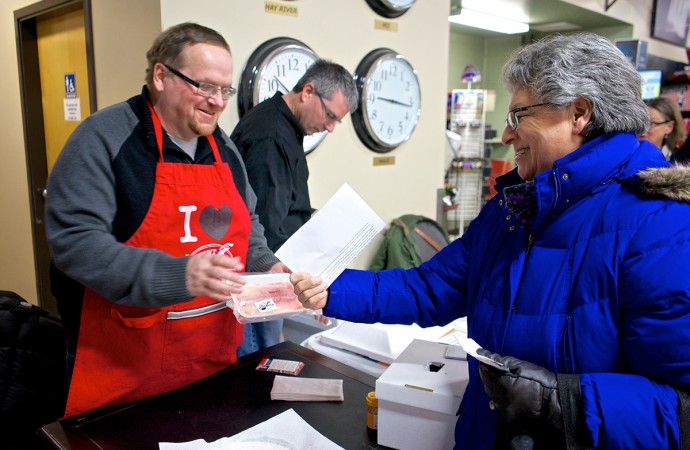 The Government of the Northwest Territories is hoping new branding will help give a boost to the commercial fishing industry on Great Slave Lake.

The new brand, named NWT Fresh Fish from Great Slave Lake, was jointly launched along with a new logo in Yellowknife and Hay River on Saturday.

According to the GNWT Department of Industry, Tourism and Investment (ITI), the logo is meant to serve as an assurance to the consumer that the fish they are buying is locally-sourced.

MLAs Robert Bouchard and Jane Groenewegen were present at the Hay River Super A grocery store to take part in the launch.

“I think it’s an important step,” Bouchard told The Journal, noting that he hopes a developed brand identity will help the local fish economy, which has seen a downturn in recent years.

“It’s definitely of a superior quality, in my opinion,” she said, adding that eating local fish is not only good for the economy, but also good for your health.

During Saturday’s launch, residents were asked to submit their favourite fish recipes in exchange for a free fillet of fish.

ITI has produced a number of recipe cards as part of the program, featuring favourite recipes from notable Northerners such as singer-songwriter Leela Gilday, Yellowknife’s SnowKing Anthony Foliot from Yellowknife and Hay River’s Jean Carter.

A list of participating grocery stores and restaurants can be found at www.nwtfreshfish.ca