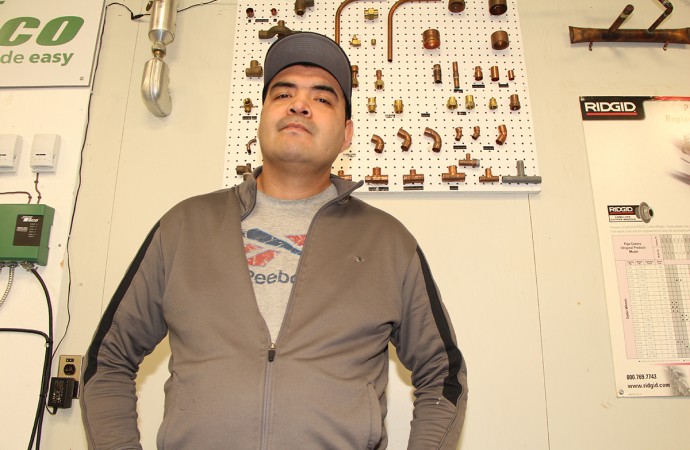 Philip Goulet entered the plumbing apprenticeship program at Aurora College to get his certification and build on the skills he’s picked up while working in the industry for years.Photo: Dali Carmichael.

As the government of the Northwest Territories strives to fulfill its goal of bringing an additional 2,000 people up North over the next five years, it’s likely that a slew of new houses, community infrastructure and resource development projects will be needed to accommodate the masses.

That means it’s probably a good time to get into the Northern trades industry, something students in Aurora College’s trades and apprenticeship programs have taken into account as they plan for the future.

Daylen Weber, 25, a fourth-year student in the school’s carpentry program, said he is looking forward to a lifelong career doing something he loves once he receives his red seal certification, which will let him practice his trade anywhere in the country.

“It’s a trade that I can see lasting forever,” he said. “There’s a lot of variety; you don’t have to do the same thing day in and out. It’s not like an office job where you have to sit at a computer. With this stuff you learn every day.”

While completing his apprenticeship under YK Construction Management, Weber operates a side business in Yellowknife called My Day Services. On evenings and weekends he tackles all sorts of projects, from roofing to renovations.

“I enjoy shop the most,” he said. “I love to build and I love to figure things out. I get to do drawing; I mean, how often do you get to sit down and draw something that you’re actually going to build?”

Eventually, the young entrepreneur plans to run his own carpentry company that his current employers can subcontract.

The cities and communities of the North aren’t the only places looking to hire tradespeople, as resource development projects remain some of the main financiers of territorial operations.

Jeff Martin, 30, is a second-year electrician student employed with the Dominion Diamond Corp. (DDC), owner of the Ekati mine. He worked his way around the country in the mining industry for almost a decade, bumping from position to position until he settled in his stream.

“I’ve been on the mechanical end of things my whole life, but the electrical always interested me,” he said. “I just like to see what’s behind the switch when you turn on a light.”

A few years ago, he completed the first year and in-school session of his apprenticeship at the Northern Alberta Institute of Technology before heading to Yellowknife.

“We have to be very diverse in what we do,” he said, noting that his training prepares him to do everything from working with motors to helping with underground and surface operations, lighting and heating. “The electrical world is huge.”

A similar level of diversity is needed for plumbing students like Philip Goulet who, at 42, is the oldest apprentice in his group working with DDC.

Goulet is a veteran of the industry after working in plumbing for most of his adult life, though he never received his red seal. Every year he and his family – including his young son – move to Fort Smith for about eight weeks so he can complete his in-class sessions.

“Anything, I can do it,” he said, listing the various piping projects he has completed, which range from processing and sewer plants to home maintenance. “The challenging part for me is the books; it’s hard getting back into those” after decades of being out of school, he noted.

Like his fellow industry workers, Goulet is excited to see what his prospects are as a certified tradesman in the North, a place he sees as a land of opportunity.

“I’m there to get my certificate and then see what my opportunities are,” he said. “I’m the type of person who likes to work.”