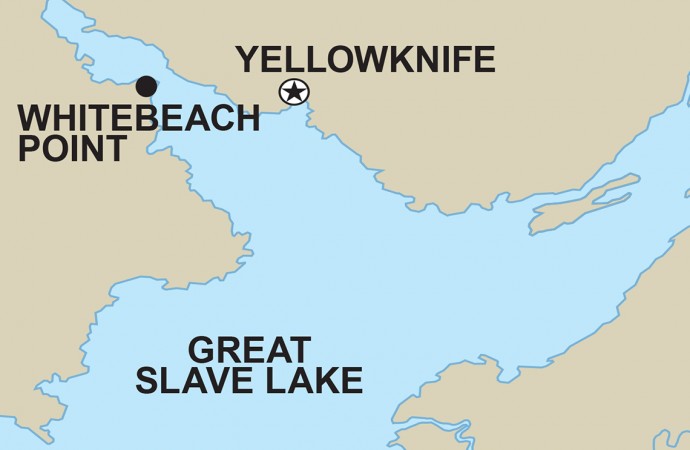 Husky Oil’s proposal to do exploratory drilling for silica in the Whitebeach Point area on the North Arm of Great Slave Lake has been referred to the review board for environmental assessment.

An application to drill for high quality silica sand used in hydraulic fracturing operations on the North Arm of Great Slave Lake was forwarded to the review board for environmental assessment last week.

Husky Oil recently applied for a five-year land use permit to drill 50 km west of Yellowknife for the fine, quartz-rich sand needed in fracking starting this spring.

Last Monday, the Wek’eezhii Land and Water Board concluded that the proposal to do exploratory drilling near Whitebeach Point “is a cause of public concern” and should be referred to the Mackenzie Valley Environmental Impacts Review Board for a full environmental assessment.

“In the Board’s view, the public concern it identified in relation to this proposed land use operation is substantial and widespread,” reads the decision handed down last Monday. “It should be addressed before operations are initiated.”

The board concluded an environmental assessment would be needed “to facilitate further engagement, broad participation in the process, more thorough consideration of traditional knowledge and cultural impacts, and evaluation of a comprehensive array of factors that may be contributing to public concern.”

Projects are referred to the review board when it is determined that a proposed development might have a “significant adverse impact” on the environment or be a cause of public concern.

Statements of concern were issued by the Tlicho Government, Yellowknives Dene First Nation and the North Slave Métis Alliance, as well as non-governmental organizations and the general public.

Concerns centered on the area’s cultural, recreational and spiritual value for local Aboriginal groups, as well as the need for environmental protection – concerns Husky did not adequately mitigate in its follow-up response, according to the board.

Husky spokesperson Kim Guttormson said it is too early to determine whether the decision will impact the company’s going forward with the project.

“We will wait for the Mackenzie Valley Environmental Review Board to outline its process before determining our next steps,” Guttormson said.

The company hopes to drill 200 boreholes in search of silica, a fine sand used in fracking to prop shalebed fractures open in order to release gas or oil to the surface.

Whitebeach Point is just one site being considered by Husky, whose exploration plans are based on research done by Aurora Geosciences in 2012, which also identified similar high-grade silica deposits in the Liard River valley and along the Mackenzie River.

Last year, Husky withdrew its application to drill and frack up to four wells in the Sahtu region of the territory, indicating its desire to postpone for two years. The regional land and water board had delayed a decision on the proposal just weeks prior to its being withdrawn.