Walking With Our Sisters wanders off to Whitehorse 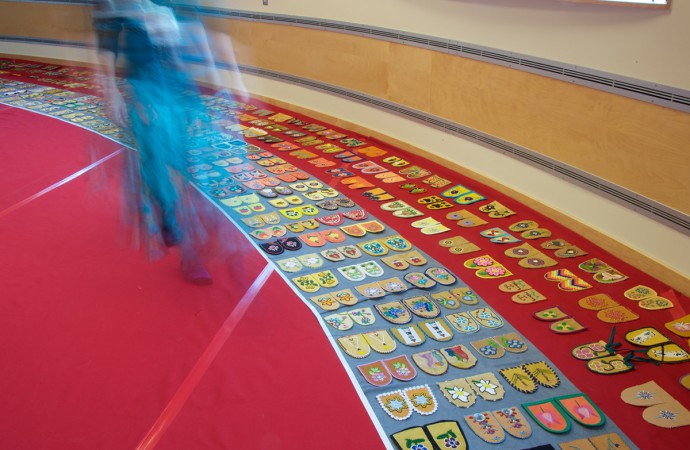 The 1,800 uppers in the Walking With our Sisters exhibit - which represent the unfinished lives of missing and murdered indigenous women across the country - may have moved on from Yellowknife, but organizers are hoping the awareness it helped create around the issue will be lasting.Photo: Tessa Macintosh.

The sacred space that hosted the Walking With our Sisters (WWOS) exhibit last month in Yellowknife has been packed away upper by upper, as the unfinished slippers representing the unfulfilled potential of lost indigenous women prepared for their to journey to their next home in Whitehorse.

While the memorial installation is gone from the Prince of Wales Northern Heritage Centre, organizers hope the discussions it helped facilitate will remain as people in the NWT and families across Canada continue to dealing with the problem of missing and murdered indigenous women and healing from their losses.

“The exhibit is primarily about honouring women from the indigenous community who have become missing and murdered,” said Lila Erasmus, a volunteer organizer and moderator for the final of three teach-in sessions associated with WWOS Yellowknife. “As you walk through it makes it all real. You understand that these were real people, that they had family that loved them dearly. They were mothers, they were sisters, they were aunts, they were daughters. We had affected families from the NWT.

“Secondarily it is about creating awareness and starting those discussions in our community about why so many indigenous women can be targeted for murder and go missing, why there are rarely any stats kept and why the government doesn’t feel that it’s necessary to put their resources behind finding out why, finding the gaps and preventing it,” she said.

Four community sessions held from September to December and three teach-in panels under the theme Uncomfortable Truths and New Relationships held in conjunction with the installation gave people in the NWT a chance to hash out the many issues around the complex problem. The final discussion took place on Jan. 26 at the Chief Drygeese School in Dettah.

“As Aboriginal women we want to know why we have a 20 per cent more chance of being murdered and going missing than any non-indigenous woman in that room,” Erasmus said. “Why is it that so many organizations that can make change don’t do anything about it? Why do we not want to know?”

Four women sat on a panel in the final session and addressed racism and colonization as elements that strongly influence the negative trend.

Dr. Marie Wilson of the Truth and Reconciliation Commission spoke about the lasting impact of residential schools, and how they continue to contribute to modern day problems by driving them underground.

“She talked about how some indigenous people feel shame for their culture,” Erasmus said. “There were individuals that had said they never felt that shame in their home. It wasn’t until they came out of their home and out of their communities that they started feeling shame for being indigenous. There were grandmothers and grandfathers who made sure their families didn’t speak the language because of that shame.”

The women also addressed ways to help eradicate some of those problems.

“We go out, get educated because we want to come back and help communities,” Erasmus said, echoing statements made by panelist Lianne Mantla, who went to school for nursing to bring healthcare to the Tlicho First Nation.

“I think that there was a whole lot of awareness created,” Erasmus said. “That is going to be the lasting impact and something truly positive that comes out of it for our communities. I think that we’re going to see from this point forward possibly more of these discussions; we’re going to see community members possibly defending the indigenous communities when they come up against stereotypical attitudes. I would hope that we would see more discussions like this.”