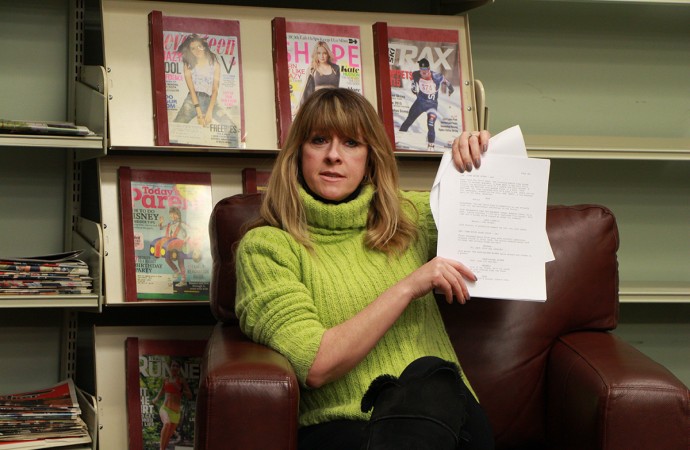 Author Tish Cohen enlists audience members in Fort Smith to do a read through of her script for Town House, which she adapted from her novel of the same name.Photo: Dali Carmichael.

It was a crooked path to success for Toronto-based author Tish Cohen, but with each published novel, she is getting a little more comfortable with the gig.

Cohen, wrapping up the writing process on her ninth book, toured around Fort Smith, Hay River and Yellowknife last week, sharing tips with aspiring writers hoping to create their own books and screenplays.

The latter is not her forte; the editor turned author turned screenwriter picked up the skills on the job after her novel Town House was picked up by Hollywood manuscript scouts in 2005. Fox 2000 decided to take on the project and, a few weeks later, her book was bought by Harper Perennial to be published.

Originally, the film adaptation was to be produced by Ridley Scott (Alien) and directed by John Carney (Once), with a script written by Doug Wright (Memoirs of a Geisha) starring Zach Galifianakis (The Hangover). However, the studio wasn’t happy with the script and asked Cohen to write the screenplay herself, a task she completed in a month after some training with one of New York’s top script-writing teachers. Now, filming is expected to start in the fall and while Galifianakis is no longer attached to the project, Kirsten Dunst has signed on.

Just because Cohen’s first published novel is getting the Hollywood treatment doesn’t mean success came easily or quickly. The book was only picked up by publishers after her first two “stacks of paper,” as she calls them, were rejected by literary agents and editors.

“My theory is always start at the top and work your way down,” Cohen said to an audience at the Mary Kaeser Library in Fort Smith on Mar. 25. “I went to the pope’s agent, because the pope has an agent. His name is Morton Janklow and he’s based in New York and he’s known as the ‘literary lion.’”

Despite being turned down by some of the biggest names in the publishing industry, Cohen kept pushing forward with her dream.

“What I was doing then as every rejection was coming in was – and if you’re going to try and get published you’ll go through this because no one skates right through – I would let myself weep for a day and then I would pull myself together. I would take what they said in their letters and apply it to the next novel. I wasn’t going to keep pushing out the same novel.”

Cohen shared some tips of the trade with her small audience. After reading the second chapter of Town House aloud, she doled out scripts from her screenplay to members of the audience to do a read-through of the same scene. Afterwards, the group discussed the differences between writing for novels and writing for performance pieces.

“It’s very different,” she said. “I think it’s harder because you have to say more with less. You can blather on more in a book, but a script is generally about 120 pages long. As a beginner, you never do anything longer than that because Hollywood won’t buy it, because one script page is about one minute of screen time. Every page is expensive, so every word is expensive.”