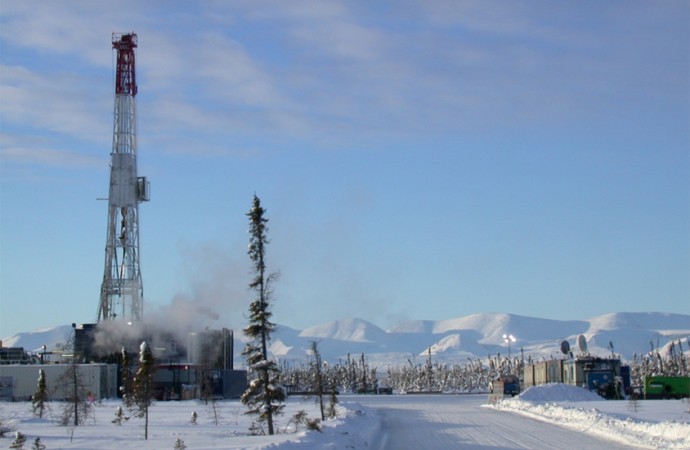 ConocoPhillips’ most recent drilling application indicates it has found enough shale oil at it’s Dodo Canyon and Mirror Lake wells to continue with “sustained production” on the EL470 lease, found just across from Norman Wells on the Mackenzie River.Photo: ConocoPhillips.

An application from oil and gas giant ConocoPhillips to the NWT energy regulator indicates the company may have discovered enough shale oil at its lease near Norman Wells in the NWT to jump into full-blown production.

The company submitted an application for a Significant Discovery Declaration (SDD) late last month under the NWT Petroleum Resources Act regarding two exploratory wells on its lease in the Canol shale play in the Sahtu, where the company conducted the first-ever horizontal fracturing, or fracking, in the territory last winter.

Though the company refused to give details on the discovery, the application suggests it has found enough shale oil at its Dodo Canyon and Mirror Lake wells to support “sustained production” on the EL470 lease, located on the west side of the Mackenzie River across from Norman Wells.

If the regulator decides that the discovery is indeed significant, ConocoPhillips will be able to apply for a Significant Discovery Licence (SDL), giving the company exclusive rights to exploration, drilling and production within the discovery area.

ConocoPhillips currently holds the permits to drill and frack up to 10 more wells in the Sahtu, in addition to the two exploratory wells drilled in the winter of 2014. The company cancelled its winter drilling plans for 2014-15 after the project was left out of the multinational’s capital budget, but the SDD application indicates there is renewed interest in the Canol play area.

It’s now up to the oil and gas regulator to decide whether there has been a significant discovery and how large that discovery area is, using information from wells drilled in the area, seismic data and other scientific and engineering research taken from information provided by the company, court decisions, publicly-available information and responses from Directly Affected Persons (DAP) in relation to the project.

Hearing only open to those ‘directly affected’

Under the legislation, individuals or organizations interested in having input on the regulator’s decision must prove that they are directly affected.

While there is no clear definition for “directly affected” in the act, the office of the regulator makes clear on its website that “not every person who is interested in the matter would be considered a DAP.”

People applying for DAP status in relation to ConocoPhillips’ application are required to tell the regulator why they believe they are directly affected by the proposed SDD, and what technical information they can provide to the regulator.

“A DAP will typically be the holder of an ‘interest’…or the owner of mineral rights bordering on the exploration licence held by the applicant for the SDD,” according to the regulator.

The deadline to submit an application to be considered a DAP is April 1, 2015. ConocoPhillips will then have until May 1 to file any comments on DAP submissions.

Following a notice of a forthcoming decision from the regulator, DAPs have 30 days to request a hearing into the declaration.

Those hearings are conducted in private and DAPs are not allowed to see other information submitted by other applicants in the process, due to the confidentiality of proprietary information.