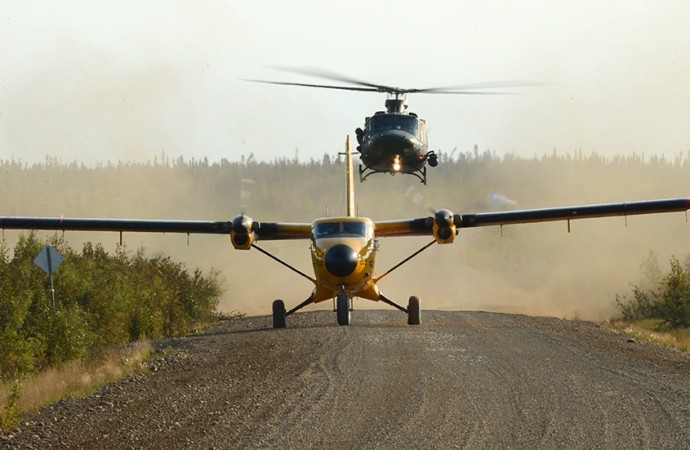 Pilots use a Canadian Forces CC-138 Twin Otter and CH-146 Griffon helicopter to conduction aviation drills on the Dempster Highway just west of Tsiigehtchic during Operation Nanook in 2012.Canadian Forces.

Operation Nanook, the annual military exercise by Joint Task Force North (JTFN) that “asserts Canada’s sovereignty over its northernmost regions,” will be held in Fort Smith at the end of August in conjunction with a community mock disaster exercise to prepare for a possible wildfire emergency.

“I am extremely glad this scenario came up,” said Don Webb, the Fort Smith town council lead on the initiative. “I live in fear (of a wildfire) here every summer, as most citizens do. We’ve got to get this thing done.”

An organizing meeting was held in Fort Smith in early March with JTFN representatives as well as RCMP from Yellowknife, and included heads of major community agencies. Webb said the military was happy to see the idea received with enthusiasm.

“They were very pleased. They want to see buy-in.”

The mock disaster exercise will likely involve the evacuation of one area of town as well as an air evacuation of people with medical conditions. Volunteers will pose as patients to be transported by ambulance and loaded onto airplanes on stretchers. Meanwhile, residents of a pre-determined area of town will be registered and transportation will be organized for them to travel to a site away from town for several hours. RCMP will be on hand in force to ensure there is security around the neighbourhood with empty homes.

The idea of the exercise is to challenge different aspects of the town’s emergency response capability so issues and weak points can be ascertained. How well the whole thing is managed and led will be of key importance and a primary learning experience.

“Tabletop scenarios are great, but they don’t address issues. People need to be challenged,” Webb said. “If we get it to work in a small scenario, we will be more ready to deal with it if we need to in a big one.”

He said the fire that struck Slave Lake, Alta. in 2011 “woke everyone up.” Unforseen issues challenged the community unexpectedly, like when the town lost electricity and could not pump water.

The mock disaster in Fort Smith will be community-run, including the evacuation, and will not involve the military. RCMP will be brought in from other communities to bolster the local detachment. A territorial State of Emergency will be declared, meaning there will also be staff coming into the community from the department of Municipal and Community Affairs.

Operation Nanook will be separate, running concurrently. Roughly 84 military personnel will be on site, including 60 soldiers plus commanding officers and support staff. They will be active in fire-smarting areas of the community and will play other roles.

Last year, the military exercise was centered in Iqaluit and involved a mock search and rescue scenario in nearby Davis Strait, involving both marine and airborne resources. The late summer exercise in Fort Smith will involve coordination between military personnel from JTFN and the local Ranger troop working with community and territorial agencies.

Webb said no details beyond general information will be released on what is to take place, preserving some element of surprise to make the mock disaster exercise more real. He said he was involved with the drafting of the town’s emergency plan in 1999 and it has not been updated since.

“Back then there was a fleet of school buses in town (to be used for evacuation). Now there are only two buses.” Key to the whole exercise will be “that it is well managed; there is no panic; there is a lot of good communication, and buy-in from the community,” he said.

“This is a wonderful opportunity. It’s for all of us. Buildings can be repaired and replaced. The human side is another story.”

Operation Nanook has been run annually since 2007 in different locations across Canada’s North. Mock disaster exercises are supposed to be run in NWT communities every five to 10 years. One was scheduled to be carried out in Fort Smith six years ago but was cancelled. The last one in Smith, a simulated passenger jet crash, was held over 20 years ago.

Webb mused that with so little snow on the ground now and the prospect of another summer of drought in the southern NWT, the potential for another season of threatening wildfires is real. He said the hope is no fires will threaten Smith, but especially before the training exercise is run.