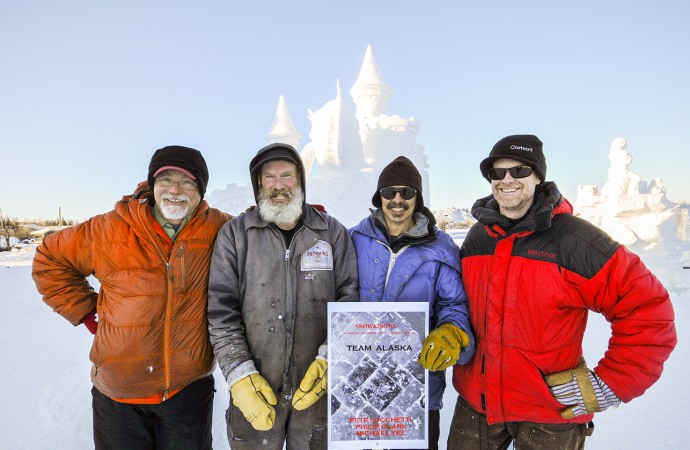 For the past two decades, Yellowknifers, led by the notorious Snowking, have been heading out on Yellowknife Bay to construct their winter wonderland, a castle made of ice and snow.

To celebrate the 20th anniversary of the Snowking Winter Festival, the crew has set out to build their most architecturally complex design yet and on Sunday, they kicked off the festival’s array of events as diverse and unique as life in the North itself.

“We’re hoping to do some sort of historical timeline of the castles in the past,” said festival director Erika Nyyssonen. “Year five was kind of the first year it became a festival, and then in year 15 there was a lot of funding support, so it was a pretty big festival, a lot of performers and artists. Within the last five years since I’ve been festival director we’ve made a lot of changes and are now registered as a non-profit association.”

In partnership with Yukon’s Sourdough Rendez-Vous Festival, carvers from across the North spent the week preceding the festival in competition, going head to head crafting snowy statues to protect the castle.

Team Alaska, made up of carvers Pete Luccetti, Philip Clark and Michael Yee, took home the top prize after creating a ferocious ice-breathing dragon to stand guard outside the royal ice palace.

A timeline detailing the castle’s evolution will hang from the walls throughout the festival’s run during the month of March, Nyyssonen said.

“There’s lots and lots of ice masonry happening; we’ve really pushed the envelope with our ice this year,” said festival founder Anthony Foliot, otherwise known as the Snowking. “It used to be that we just worked in snow but I was fortunate enough to get a couple of really keen guys who wanted to stretch the boundaries of working with ice and so we’ll have some real pretty surprises, once we’re open, that people can come and look forward to.”

Foliot wouldn’t give many details as to the additions made to this year’s castle, but invites anyone and everyone to take a look for themselves while taking in all sorts of cultural events from around Canada and the circumpolar North.

“Every weekend we have something going on,” he said. “I highly recommend that you come before the end of the month because once the month is over, the castle is closed and you missed it all.”

Old favourites like the Frozen Dog Film Fest hosted by Western Arctic Moving Pictures, Dead North, Brrrlesque and the Royal Ball will be returning this year, along with a host of new acts and southern performers.

One of the most intriguing acts to check out this year is Norwegian artist Terje Isungset, who will be bringing his unique ice music to the castle, using frozen blocks to create masterful works of percussion on Mar. 11.

In addition to hosting art from the K’alemi Dene School, kids are encouraged to visit the ice castle to take in acts like Ontario’s Sheesham and Lotus, a Frozen party and sing-along sessions with Prof and Snow and the Peekaboo Kazoo.

There will be entertainment for adults too, as most evening events will feature a range of blues and rock bands, comedy shows and a Royal Rave.

For a full list and schedule of Snow King 20th anniversary events, head to http://snowking.ca/