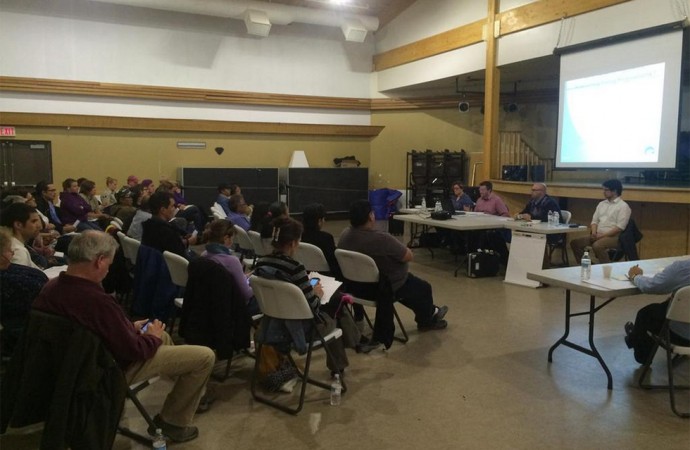 Residents of Fort Simpson take part in a public meeting on the NWT’s newly proposed regulations for hydraulic fracturing, hosted by a panel from Industry, Tourism and Investment.Photo: Jim Antoine/Twitter.

Creating new regulations for hydraulic fracturing, or fracking, in the Northwest Territories is putting the cart before the horse when it comes to the Dehcho region, First Nations leaders said last week in Fort Simpson.

Representatives of the Dehcho First Nations (DFN) voiced a resounding ‘no’ to the GNWT panel that visited Fort Simpson last Tuesday to engage the public on new rules for oil and gas companies wanting to conduct horizontal fracking in the territory.

“DFN will not allow or consent to hydraulic fracturing of oil and gas reserves in Dehcho traditional territory,” reads the First Nations’ statement to the panel. “We consider the proposed GNWT regulations illegitimate and improper. We expect you to take ‘no’ for an answer.”

DFN Grand Chief Herb Norwegian couldn’t be present at the meeting due to ongoing land claim negotiations with the GNWT in Yellowknife, but sent resource management coordinator Dahti Tsetso with the statement outlining DFN’s position.

According to the chief, the new rules are a violation of the existing Interim Measures Agreement (IMA) for the region that is still negotiating its land claim. In the IMA, the Crown must confirm explicit support or non-support from the First Nations for oil and gas issuances on Dehcho territory.

“Jurisdiction over oil and gas developments of any kind – including fracking – is still unresolved between DFN and the Crown under the Dehcho Process,” the statement reads.

“The GNWT’s move to bring forward new terms and conditions for oil and gas exploration by introducing new fracking regulations without the support of affected DFNs is not permitted under the terms of the IMA.”

The statement also outlines concerns DFN has with the possible environmental impacts from fracking, including air pollution, surface and groundwater contamination, and impacts on ecosystems.

Industry, Tourism and Investment Minister Dave Ramsay said there have been no oil and gas issuances in the Dehcho and therefore the IMA has been respected.

“The government has not initiated an oil and gas exploration issuance cycle in the Dehcho at this time,” he said in a written response to The Journal. “Should one occur in the future, it will be conducted according to established legislation regulating development in the Mackenzie Valley and commitments set out in agreements with Aboriginal governments.”

Ramsay added that the regulations are consistent with the GNWT’s commitment to strengthen existing rules handed over to the territory through devolution.

This is not the first time the Dehcho has said ‘no’ to fracking. In 2013, the Liidlii Kue First Nation in Fort Simpson passed a resolution calling for a moratorium on fracking until further research could be conducted on impacts to the land, water and human health, and until there were proper regulatory requirements and safeguards in place for the unconventional drilling process to proceed.

The GNWT panel has been touring communities throughout the territory since Apr. 9, stopping in Inuvik, Fort Good Hope, Tulita and Norman Wells before heading to Fort Simpson and Nahanni Butte.

Further public meetings will be held in Fort Liard, Hay River, Fort Smith and Yellowknife, with dates to be determined.

The draft regulations will be available for comment for 90 days, or until the end of June. They can be found online at www.iti.gov.nt.ca.