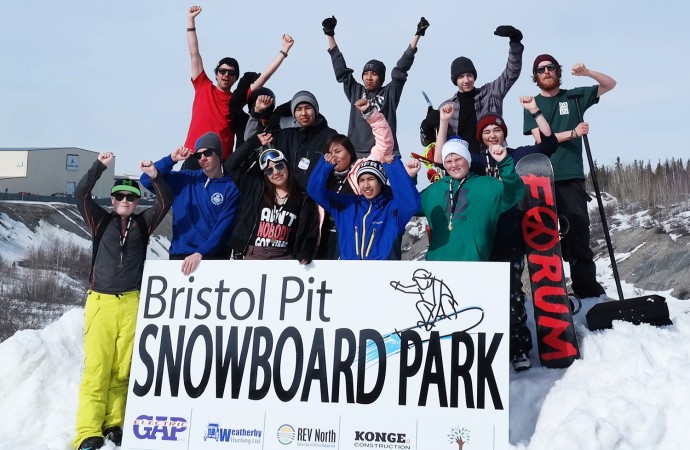 Youth spend the day of Apr. 10 training with top NWT snowboarders Andrew Matthews and Molly Milligan, warming up for the territorial competition the next day.Photo: Andrew Matthews.

Just before the snow melted away, young snowboarders in the NWT met up in Yellowknife for the final territorial competition of the season.

About 13 youth from the capital and Fort Liard hauled their gear out to Bristol Pit on Apr. 10 and 11 for a weekend of friendly competition in one of the territory’s growing sports.

Competitors were between 14 and 18, the age group that will attend the 2016 Arctic Winter Games (AWGs) in Greenland. They competed in slope style, a rail jam and slalom disciplines, all slightly modified for the small hill.

Junior boarder Alinda Edda and juvenile Abby Duntra, both from Fort Liard, were the only girls to ride on Saturday, the day of the competition. In the junior male category, Torin Dowe from Yellowknife took first place, while Stan Bertrand of Fort Liard took second. In the juvenile males, Yellowknifers snagged the top spots with Ben McGregor in first, followed by Ben Toner and Matthew Wiebe. 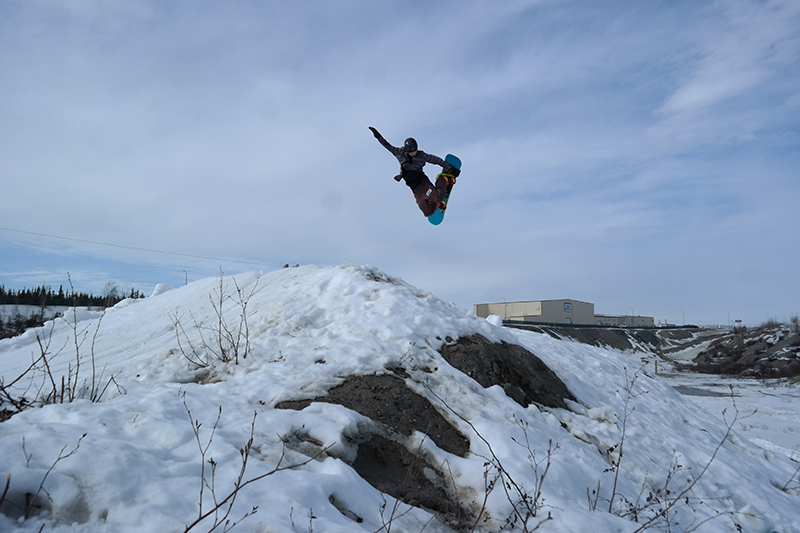 Torin Dowe of Yellowknife shows off his freestyle skills.

“From this event we’re hoping to select a group of snowboarders that will make up a development team,” said Lyric Sandhals, executive director of the NWT Boardsport Association. “They’re not necessarily already selected for the AWGs for 2016, but they’ll get together next season and maybe go to a couple of competitions and just train. In January we’ll have our territorial selection. We’re just trying to get a program going, we haven’t had a very structured program for snowboarders or clear pathways so we’re just kind of starting out.”

On the Friday evening before the competition, youth had a chance to warm up during a training session with top NWT boarders Andrew Matthews and Molly Milligan, who have both showed their skills in southern and international events. Matthews said he enjoyed putting on the clinic, especially because it gave him a chance to give back to a community that has given him so much support.

“The weather was amazing and the course that we put together was great for the kids to progress and have fun,” he said.

“It was good to have two of our high-performance snowboarders out,” Sandhals said. “They’ve gone down south and trained at a higher level. They were with the kids giving them tips before the event on Saturday, and I think that really encouraged them.”