Consensus government must be improved 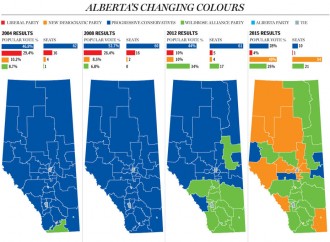 The Alberta election was a great example of the party system functioning as it should, a cornerstone of democratic reform and government renewal. The trouncing of the Alberta PCs by the NDP was about a tired, self-serving political dynasty getting the heave-ho, replaced by an alternate leader with new energy who captured the imagination and trust of the Alberta electorate.

Almost all long-serving ruling parties become stagnant in time and a good house cleaning is routinely needed. The party system recognizes that need and by design provides a waiting alternative that promises to be capable in taking over the reins of government.

The consensus government system in the NWT and Nunavut is missing that important characteristic. When a government loses its ‘mojo,’ lacks creative thinking, has no vision, or worse, becomes corrupt, there is no ready replacement; no viable, hopefully attractive alternative within the design of consensus government – as it is now. That means there is no option for renewal. That is a problem.

Nunavut is only 16 years old and still evolving as an entity. It is still learning how to govern and manage its jurisdiction. The woeful state of its correctional system, particularly the overcrowded Baffin Regional Correction Centre, which is said to be so bad it is unsafe for inmates, is but one example. Its aging community power plants and the need for costly replacements will likely emerge as a crisis in the coming decade. Suffice to say, reworking the design of its consensus government system is not Nunavut’s first priority.

The NWT has a depth of maturity in government operations, but its consensus style of government is still developing and needs refining, particularly on these two issues:

1. How the premier is elected;

2. A renewal mechanism should the government become stale and needs to be removed.

The process by which the premier is elected in the NWT is both a constriction to democracy and less robust in terms of the evolution and improvement of the government than it could be. In the party system, the leader and his/her political followers, if they have their act together, have an enunciated vision of how the future under their direction will unfold, often backed by a political philosophy that rationalizes that vision. That is completely missing in the NWT, where the premier is selected by fellow MLAs after a speech that follows a few days of lobbying. Promotion of new drugs and to the market. The premier has no requirement to offer up a vision to the populace, no description of what will be aspired to in the future, nor a revelation of the character or direction his/her government will take. Importantly, there is a lack of process in that election, no running the gauntlet over time so candidates are challenged, forced to develop and refine their vision, improving it as they go. The lack of any participation of the public in the premier’s election is a particular flaw.

Secondly, if after a period of time the premier and his/her government becomes unpopular, there is no mechanism for replacement. There is no optional new government ready and waiting to transition into place. The beneficial side of party politics, which offer the opportunity for systemic renewal, is completely missing.

Those issues need to be addressed. This is not a criticism of the current government. It is a point of principle. The NWT’s consensus system, and Nunavut’s as well, needs to be improved. Though a party system would not work in either case with such small populations, and seems in both cases the majority of residents prefer the consensus model, a more democratic, robust form of government, particularly one that holds the current government more to account and challenges, even forces it to perform well, is possible within the consensus government framework.

The status quo is not acceptable. What is needed is a constitutional conference, a symposium where Northerners are brought together and the evolution of the means and methodology by which people are governed in the NWT are discussed. A consensus might be reached on how the mechanisms of government can be improved, but the sharing of ideas alone would make the exercise worthwhile.

A footnote: If an effort is to be made for consensus government to evolve and improve in the NWT, please do not allow, or especially solicit, southern academics and ‘experts’ to come and tell Northern residents how to evolve our future government. Northerners are amply intelligent and capable of coming up with their own solutions.