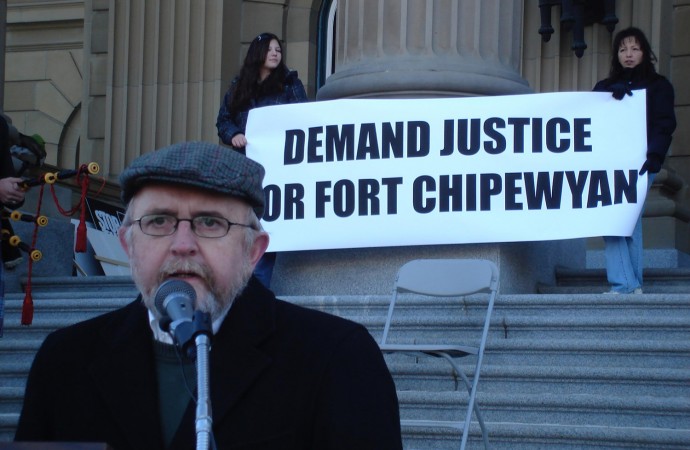 Dr. John O’Connor says he will continue to fight for the community of Fort Chipewyan, even if he is not working as a physician there.Photo: Jack Danylchuk.

An internationally recognized doctor, known for raising the alarm about high rates of rare cancers occurring downstream from the oilsands, has been fired from the community’s local healthcare facility.

Dr. John O’Connor has provided a host of medical services as an on-call physician to the community of Fort Chipewyan for over a decade, but on May 8 received notice from the local health authority terminating his services with the Nunee Health Board Society.

“I was just sent an email by the (Nunee) health director on this Friday afternoon past,” O’Connor said, noting that the email said his service would no longer be needed effective immediately. “I wasn’t given any reason and it was just like ‘bam’ after 15 years of a very good relationship.”

The letter also indicates that O’Connor has “no authority to speak to or represent the Nunee Health Board Society in any way or to any other individual, party or entity.”

While Alberta Health Services also has a signatory on the letter, a spokesperson said it was Nunee’s decision to fire O’Connor, and the provincial health authority was simply backing up it’s division.

“I e-mailed back asking why and I got no response whatsoever. It was very weird, very abrupt – stunned would be an understatement as to how it felt,” O’Connor said. “We’d had absolutely no issues, no anything. We had a dialogue going and I’ve never had a complaint about me or what I was doing, nor I should say did that staff. The current staff in place has been there probably about three years and I’ve had a great relationship with them. It’s never been any issues at all, it just landed on my lap and I don’t know why.”

O’Connor is unhappy with the situation and said he isn’t the only one.

“A lot of people in the community have been in touch, a lot of very angry people wanting to know what happened, including staff at the nursing station who are very angry because they had no indication,” he said. “I was told by them that they were told ‘that it’s time for a change.’ If they didn’t want my service or it was an issue or whatever, there are phone lines. It’s just like being kicked in the face and then the kicker runs away.”

In 2007, Health Canada filed four complaints of misconduct against O’Connor, claiming he was causing undue alarm with his claims that rare cancer rates were higher in the northern Alberta community than many other places in Canada.

“I spent some three years defending my licence to practice medicine, which I did successfully,” he said. “That was just in Fort Chip, trying to figure out why the cancer numbers were as they were back then; they’ve since escalated. Health Canada complained that I was raising undue alarm in the community,” he said. “The Alberta cancer board in 2008-09 did a study for a year in Fort Chip and they confirmed that there was a 30 per cent higher rate of cancers among the rare cancers and suggested the health study be done.”

The study, to O’Connor’s knowledge, has not been completed yet.

Just because he isn’t working in Chip doesn’t mean he’s ready to stop advocating for the community, he said, traveling to gatherings across the world to spread awareness about the little hamlet’s cancer problem.

“I’m usually invited to speak or if I’m at a gathering itself I might be called up,” O’Connor said. “If I’m called about Fort Chip I generally respond if I can because the community needs justice, it needs advocacy.”

Despite the situation, O’Connor said he would return to work in the community in a heart beat.

“I’d love to know why,” he said. “I told them easily that I would come back any time and be on call for free like I’ve offered over the years, because I love the community. After 15 years it’s not an onerous task at all.”

The Alberta Health Services reserved comment when contacted. The Nunee Health Board Society did not return calls from The Journal.