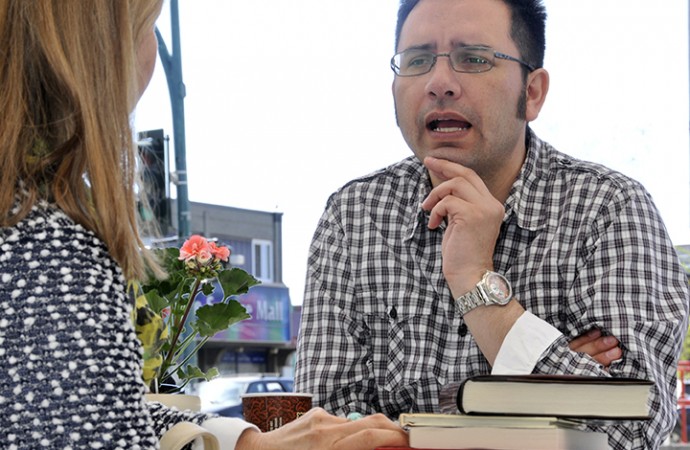 The foremost festival of words in the Northwest Territories is celebrating a decade’s worth of accomplishments this week with the 10th anniversary of NorthWords, May 28-31.

The annual gathering of readers and writers in Yellowknife is focusing slightly inward this year with its theme of Let’s Celebrate, staying true to its mission of facilitating the creation of a Northern and Aboriginal literary culture.

“What we decided we’re celebrating is the achievements of NorthWords over the past 10 years, what we’ve done, how we’ve managed to encourage local, Northern and Aboriginal writing here, and also look to the Northern writers of the future,” said NorthWords executive director Ruth Bowen.

The NWT’s young future writers will be participating in the festival this year unlike ever before. Winners of the recent NorthWords-sponsored SPARK! writing contest for high school students throughout the territory will be made the special guests of a luncheon with keynote speaker, Tlicho author Richard Van Camp, on May 31.

As well, NorthWords will be teaming up with the Listen Up! musical project happening in Yellowknife at the same time, where youth participating in the choral performance Saturday night will be treated to writing workshops with some of the guest authors, including Yukon poet Joanna Lilley, novelist Jamie Bastedo of Yellowknife and Métis author Jacqueline Guest of Alberta.

“I realized some months ago that the Listen Up! finale was going to, you could say, clash with the NorthWords festival, and I said, no, this isn’t a clash, this is a perfect case for joining together,” Bowen said. “So I’m really excited by that.”

This year’s festival also includes a lengthy list of participating Northern writers from a wide breadth of genres, from spoken word poetry to creative non-fiction, fiction for young adults and journalism, to name a few. Those authors will be participating in a number of panels sharing perspectives on Northern writing, what it means to be a “Northern” writer and how to write about the North when you’re from the south.

“Being that it’s the 10th anniversary, we wanted to invite as wide a range as we could of Northern writers, and it’s a reflection of the fact that there are just more of them now,” Bowen said, noting the expanding literary culture in the territory.

“For this year’s NorthWords prize, we had twice as many books to consider as we had in previous years, and that’s just books that were published by Northern writers,” she said.

A large portion of the visiting guest authors are also Aboriginal or from the North, including Van Camp, Guest, well-known Ojibway columnist and author Drew Hayden Taylor and First Nations writer and educator Garry Gottfriedson.

Other guests include award-winning East Coast novelists, Alexander MacLeod and Kathleen Winter, who will sit on a number of panels on plot and character writing, the need for editors, and the role of awards and festivals for writers.

MacLeod and Gottfriedson will also be leading writing workshops with some of the inmates in Yellowknife’s correctional facilities during their time in the North.

Apart from the regular gala, panel discussions and workshops, two fan favourites, the ‘Blush’ erotica and ‘Flash’ three-minutes of fame open mic nights, will make a repeat performance at the festival. By far the most popular evenings of the festival, Bowen said they are attracting more and more participants each year.

“At Flash last year, it was the first time that we had more readers than we had time for,” she said. “It’s an opportunity for people who have probably never read their work publicly before to practice, if you like, or try it out in front of a sympathetic audience. Everybody wants someone to do well – they’re not there to be hostile or overly critical.”

For a schedule of events, visit http://northwordsnwt.ca/