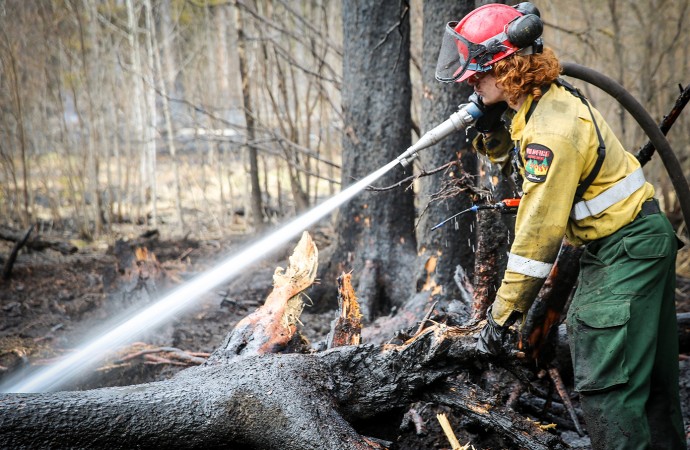 A wildland firefighter actions a fire on May 14 near Lodgepole in central Alberta.Photo courtesy Gov’t of Alberta.

The Alberta government issued a province-wide fire ban on Monday, prohibiting all open fires, including campfires and charcoal briquettes in campgrounds or backcountry areas.

The ban applies to all areas within the province’s Forest Protection Area. Municipalities and provincial parks may issue their own restrictions.

Portable propane and gas stoves and barbecues are allowed, but all fire permits previously issued are now suspended or cancelled and no new fire permits will be issued.

The ban comes as five wildfires burn out of control in Alberta, along with four others being held and 17 more under control.

There have been 21 total wildfires to date in Fort McMurray Wildfire Management Area, where the fire hazard continues to be extreme. Currently, 109 firefighters, 18 helicopters, three aircraft and other heavy equipment are stationed in the area.

Current measurements show the conditions are worse than previous years of the House River Fire and Mariana Lake Fire, when flames engulfed two miles to reach Highway 63 within five minutes, traveling 16 miles in under two hours.

“I cannot stress enough how dangerous the current wildfire hazard level is right now,” said Robyn Haugen, Alberta’s wildfire information officer for the Fort McMurray area. “All it takes is one little spark. That’s why we are implementing the fire ban.”

Violators of the fire ban could be fined up to $5,000 and held liable for all costs associated with a resulting fire.