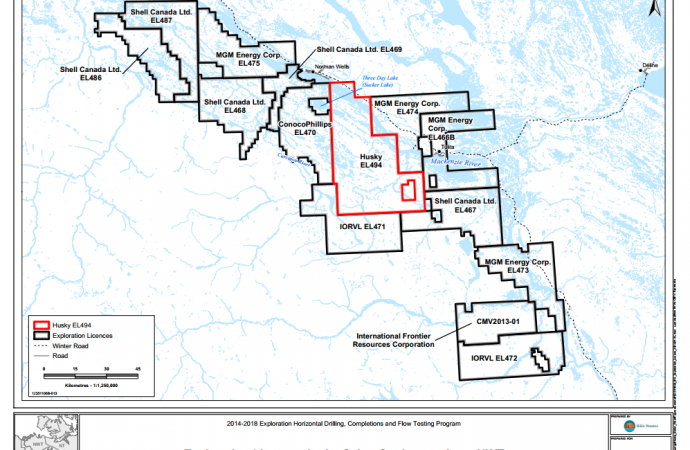 Fourteen exploration licenses have been granted in the Canol shale play near Tulita and Norman Wells in the Sahtu region of the NWT since 2010-11.Photo: courtesy of Husky Oil.

The first ever assessment of unconventional oil resources in the Northwest Territories confirms there could be close to 200 billion barrels of shale resources beneath the surface in the territory’s two major plays.

The joint assessment released last week by the National Energy Board and NWT Geological Survey makes estimates for the Canol and Bluefish shale plays in the Central Mackenzie region.

“The amount of recoverable oil was not estimated because well-test results are not yet publicly available and there is still uncertainty about whether the shales are capable of production,” states the joint news release issued last Friday. “However, if only one per cent of the in-place resource was recovered from the Canol Shale, it would represent a marketable resource of 1.45 billion barrels.”

NWT Industry, Tourism and Investment Minister David Ramsay said the study confirms what the government has known all along about significant petroleum potential in the Sahtu region.

“Scientific research in the NWT provides critical data for decision-making about land and resource management,” he said. “This new research complements the ongoing science to monitor permafrost, seismic activity and water in the region. If developed, these petroleum resources would create jobs and business opportunities and provide royalties to the GNWT and Aboriginal governments to support investment in Northern priorities.”

Both the Canol and Bluefish plays would be developed through hydraulic fracturing, or fracking.

Fourteen exploration licenses have been granted in the Canol play since 2010-11, for a total of $627.5 million in work-bid commitments. Seven exploration wells have been drilled since 2012, though there are no active projects currently.

Husky Energy withdrew its plans to frack up to four horizontal wells near Norman Wells last winter, while ConocoPhillips has yet to target any capital funds to continuing its exploratory fracking in the area and likely won’t until 2016 at the earliest, according to the company.