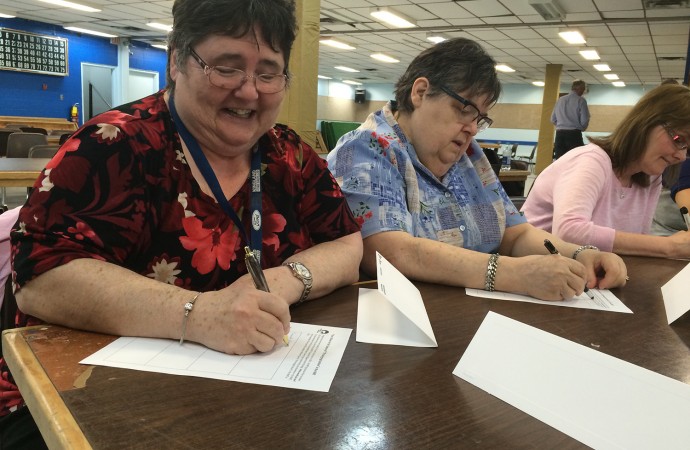 Pat, left, and Shari Burnstad write down their visions of what agriculture in Hay River will look like 10 years from now. The sisters, who organize the town’s community garden, were two of the dozen or so Hay Riverites who attended a facilitated discussion about agriculture in the NWT on May 12.Photo: Scott Clouthier.

Farmers, gardeners and agricultural enthusiasts had their say last week in the South Slave with the first round of consultations aimed at creating an agricultural strategy for the NWT.

The visioning exercises, put on by the territorial government and facilitated by agriculture consultants Serecon and Planet North, took stock of where people are at in terms of growing food in Fort Simpson, Hay River and Fort Smith, and what they’d like to see if they were suddenly transported to their community 10 years from now.

“A year-round local greenhouse, fresh, local fruits and vegetables for the food bank and for elders, and community fruit trees – a fruit orchard with local species,” Lynn Buckley gave as part of her community vision.

“Greater access to better quality, fresh produce and greater engagement with food, and through that, engagement with the environment we live in,” expressed Rebecca Cabell, a member of Fort Smith’s sprouting Garden Society.

“Access to fresh, local fruits and vegetables for Northern communities, especially the more isolated ones, because the cost is ridiculous,” shared Sadele Paulette, who said such access would address health issues like diabetes.

Fresh food has certainly been a major theme, noted Jerry Bouma, one of the consultants facilitating the sessions.

“People really want to see more fresh food – vegetables and fruits – produced locally,” he said, “whether that be personal or in community gardens or greenhouses. People want to see a lot more than is currently produced.”

Along with the hunger for more local produce, Bouma said people are craving more education and infrastructure, and are excited about the side benefits agriculture could bring to the territory. 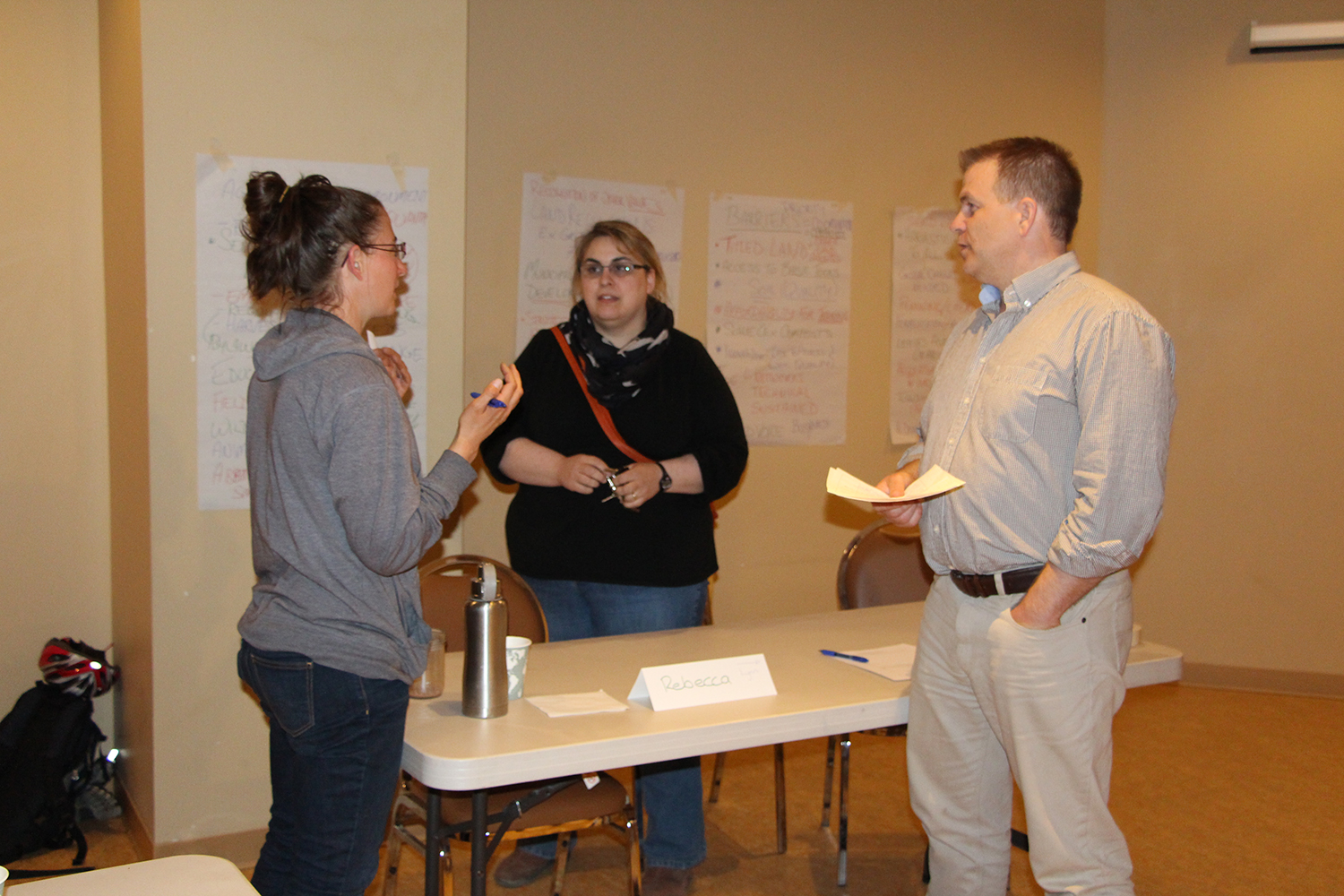 Rebecca Cabell, left, and Lynn Buckley chat with agriculture consultant Markus Weber following a facilitated discussion on the future of agriculture in the NWT, held in Fort Smith on May 13. The consultants will visit Norman Wells, Fort Good Hope, Inuvik and Yellowknife over the next week.

“People want a lot more knowledge on how to produce food,” he said, whether that be a go-to instructor with the knowledge, or a train-the-trainer program for communities, gardening education in schools or help with the marketing side of things.

On the infrastructure side, people have expressed interest in community greenhouses, farmers’ markets, storage areas like root cellars, a commercial kitchen for processing foods, a seed library and even an abattoir for slaughtering animals.

In Hay River, the well-attended meeting the night before brought forward many of the same feelings of people wishing for more self-reliance, and wanting practical changes to make that happen.

“I want to be a farmer and I don’t want to wait until I grow up,” said Kate Latour, who lives in Hay River’s old town and grows vegetables from raised bed plots. “I want to be able to feed my own family and not rely on food from a truck.”

Many emphasized the importance of small-scale operations, and improved co-operation and connectivity between regions.

“To me, partnership is key,” said Kevin Wallington of Polar Egg, Hay River’s commercial poultry and egg farm. “We cannot afford to have region against region…We need to encourage everyone to work together. We either work together or we die alone.”

The meetings also left time to chat about barriers, and ways in which those can be lifted to realize people’s visions. Major challenges identified were access to land, in many ways impeded by bureaucracy; access to fertile, black soil; access to affordable training, equipment, seeds and plants; and, most fundamentally, a lack of continuous, coordinated support in communities to help people get started and keep going.

“Bylaws are restrictive, even if you have a lot of land,” said Orlanda Patterson of Hay River, who said she wants to be able to feed her family year-round, even through the winter. “There’s a limit on how many animals you’re allowed to have.”

“I’d like to be able to be self­ sufficient on my own property and grow my own food,” said Leon Bouchard, who has chickens and rabbits, even though the bylaws don’t allow. He said the town needs to change bylaws to allow animals on people’s properties.

Over in Fort Smith, Bruce Gudeit agreed, and said if growers unite, they will have more influence over their mayor and council.

“A unified voice gives you strength,” he said. “Working with local government is going to be easier than taking on the territorial government.”

The need for a specific territory-wide plan around agriculture grew out of previous consultations on the NWT Economic Opportunities Strategy, which aimed at targeting ways to diversify the territorial economy.

“They heard over and over again, we’re interested in agriculture, and it wasn’t just Hay River or just Fort Smith; right across the territory, at every consultation there were a few comments around agriculture and the desire to build an industry – really a desire to grow your own food,” said Markus Weber, another consultant helping to facilitate the meetings.

Additional consultations are scheduled for this week in Norman Wells on May 19, Fort Good Hope on May 20, Inuvik on May 21 and Yellowknife on May 26.
*With files from Scott Clouthier