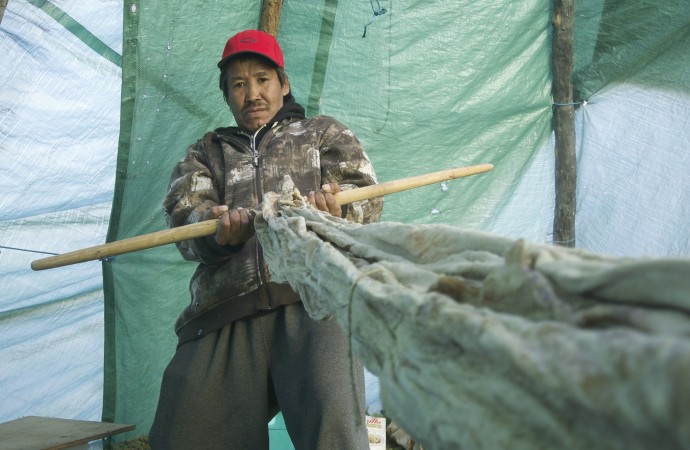 For Peter Andrew, the violent history of colonization of indigenous peoples in Canada is a difficult topic to speak about, let alone study in the classroom.

“It was one of the hardest things I could listen to,” he shared. “But it’s a history we can’t let other people forget, how indigenous people were treated not just in Canada, but worldwide.”

The 48 year-old student from Tulita is one of seven currently wrapping up the spring semester at the Dechinta Bush University on Blachford Lake in the NWT wilderness.

Fortunately, he said, the intertwining of on-the-land activities with some of the more troubling lessons in history made them easier to process, providing some respite from the triggering talk of residential schools and colonial policies and reminding him of the strength and perseverance of indigenous peoples.

“In lots of ways I gained respect,” he said. “It opened my eyes. The elders back home, some of them are survivors, they seen it first hand and been through it. It gives me more love and respect for them. Native people were never non-resistant. And without them, we would have never survived.”

“The biggest part that really stuck out for me was the resilience people had,” she said. “They didn’t give up and they haven’t given up fighting for our rights and our land.”

Over the last six weeks, Andrew, Menicoche and their five fellow classmates from Tulita, Yellowknife and Fort Smith have been hard at work taking half-day academic courses with university professors on indigenous self-determination, history, communications and contemporary art.

Students spent the second half of the day on the land learning from elders and traditional knowledge holders how to net, cut and dry fish, pick traditional medicines, hunt and tan moose hides.

The necessary cooperation required to carry out such physically demanding tasks has forged a tight bond among the cohort, said Menicoche. 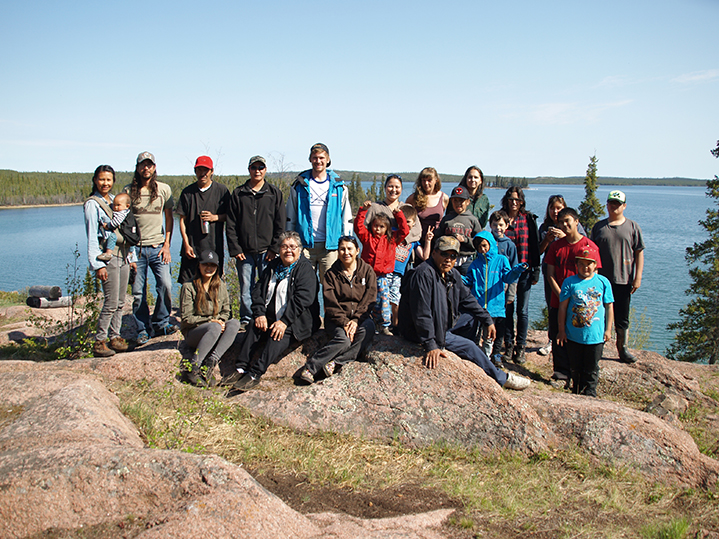 “I really learned how, being a group, you have to come together as a community or family to get stuff done,” she said. “There’s a wide range of people here, and everyone has their skills that they bring from home.”

Contemporary indigenous arts were added to the program this spring based on feedback from former students, and have enhanced other areas of learning in unexpected ways, according to Dechinta program manager Mandee McDonald.

“A lot of the topics we’re covering are pretty heavy, like residential schools, colonization, policies that have negative impacts on indigenous people and communities,” she said. “A lot of those topics can cause triggering feelings, so art through this program turned out to be a way for people to process the information they’ve been getting throughout the weeks so far.”

The course included components in theatre, taught by NWT actor and playwright Reneltta Arluk; creative writing and podcasting with comedian and broadcaster Ryan McMahon of Indian and Cowboy; indigenous contemporary film with Ariel Smith; and visual arts with Melaw Nakehk’o, a Dehcho Dene artist from Fort Simpson who also helped with the moosehide tanning instruction.

At Dechinta, students with children are encouraged to bring their kids to Blachford, where they can participate in an alternative school program for the seven weeks. This year, nine children attended Kids U, one of the largest cohorts of youth the school has ever seen.

McDonald said the youth have been helping out with moosehide tanning, camp maintenance and other land-based activities, and during their own instructional time have learned to build boats, paddle and tan their own little squirrel hides.

For Menicoche, a 39 year-old single mother, the ability to bring her two boys with her was one of the key motivations in attending Dechinta. So far, she said, it has been a life-changing experience for all of them.

“It’s a great opportunity to learn with them, to learn together,” she said. “My boys are in their early teens, and realizing they don’t know much about our culture and traditions. They’re kind of ashamed, like they’re stuck between two worlds and don’t know where they belong…I wanted them to experience it and to feel proud.”

Since arriving at Dechinta, the youth have actively engaged in work around the site in a motivated way that Menicoche said she has never seen before.

“It’s amazing to see that because usually I have to ask him to do stuff, but I didn’t have to ask; he just did it,” she said of her 14 year-old son.

“It really helps as a family to build strong attachments, because we’re working together, eating together, preparing fish together. We’re together 24/7. That’s the best part about being out here.”

Now, she said, she won’t have to struggle so much to find someone to pass along traditional knowledge to her boys.

“I found out I have a love for tanning moose hides,” she said. “So I am going to continue that, with my kids.”

Dechinta’s spring cohort is holding its graduation ceremony at K’alemi Dene School in N’dilo on June 17 from 6-8 p.m.