Cancer can be beaten – by targeting both cause and cure 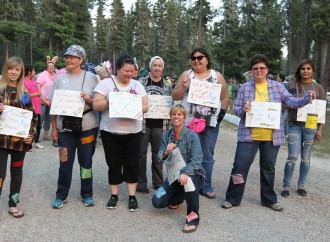 This month, Yellowknife and Fort Smith together raised $290,000 in support of the fight against cancer, demonstrating once again the amazing generosity of Northern Canadians.

Cancer is a much more formidable foe than first thought. There will never be that one “magic bullet” cure that will end it as a threat to humanity. There are over 200 varieties of cancer with hundreds of molecular profiles for each. They are often resilient and adaptive, able to mutate and evolve.

The Canadian Cancer Society website offers the alarming prediction that “two in five Canadians will be diagnosed with cancer in their lifetimes.” By 2030, the number diagnosed will reach 277,000, up from 197,000 this year. There will be an estimated 60 per cent increase in new cancer cases in Alberta within the next 15 years, so expect similar in the NWT. Yes, things are getting much worse.

“The good news is we’ve made tremendous progress,” says the Canadian Cancer Society web page. In the 1940s, only 25 per cent of those diagnosed with cancer lived to talk about it. Today the survival rate is an amazing 60 per cent.

That optimism should not overshadow the really bad news, however, that thousands of Canadians are still dying from cancer each year. That is terrible.

We need to do more than look for a cure. We need to actively seek out the causes as well, and then do everything in our power to eradicate them.

Right now that part of the fight is carried out by a small number of people who are routinely discredited, even vilified. That is not surprising, since big money is usually at stake, but why do so few fight alone?

The Canadian Cancer Society has been criticized because its approach is only reactive.

Raising money to find a cure is defensive and passive. We need to do more than that.

The American Cancer Society website (http://www.cancer.org) has an extensive list of “Known Human Carcinogens.” Here are only the ‘b,’ ‘c,’ and ‘d’s, along with the first item of the ‘e’s:

Many of these are known constituents pouring from the smokestacks of the oilsands processing factories in northeastern, Alberta – thousands of tonnes each day. Many are also dispensed by the coal-fired power plant at Lake Wabamun, north of Edmonton. Deposited on the land, they find their way into the water. They are on the food we eat, in the water we drink. They are fuel for the malignancies waiting to happen in all of us.

Diesel exhaust is known to be one of the worst offenders, yet we allow millions of trucks to belch their carcinogens into the air, a daily flood of poison that we all breathe.

Causes of cancer are like other social ills around us, like weeds in an untilled garden that we just can’t seem to find the time to deal with. Racism, poverty, homelessness, corporate greed, domestic violence, to name but a few, are everywhere, as are the causes of cancer. All of them are based in ignorance. When we hear of them we react, concerned, even horrified, then glaze over and move on.

The discussion of the day is the need to get rid of the carbon-based economy that is causing climate change. Many of the worst carcinogens are contaminates from carbon-based fuel processing, so why is cancer not a compelling part of the argument for getting rid of fossil fuels?

We cannot afford the luxury of being naive and unaware any longer. Causes of cancer are pervasive in our world, and we all know it. As much as we need to seek out cures, we also need to seek out and eradicate those causes. But how?

It is the responsibility of our governments to protect us. Instead what happens too often is collusion with those responsible. There was a reason why the Alberta department of Environment had the shredders going for days and were hauling away truckloads of destroyed evidence after the long-ruling government was defeated last month. We must be able to trust our own governments. They must be held accountable.

Start with your own political representatives now. Make sure they have their priorities right. They will attempt to deflect you. Don’t let them. Demand satisfaction. If enough people act, it is amazing how quickly they come around.

Elections are coming, the perfect time to ensure candidates will champion your cause. Get involved. The scourge of cancer, and many of the other ills facing all of us, can be conquered. We all need to join the fight to make it happen.