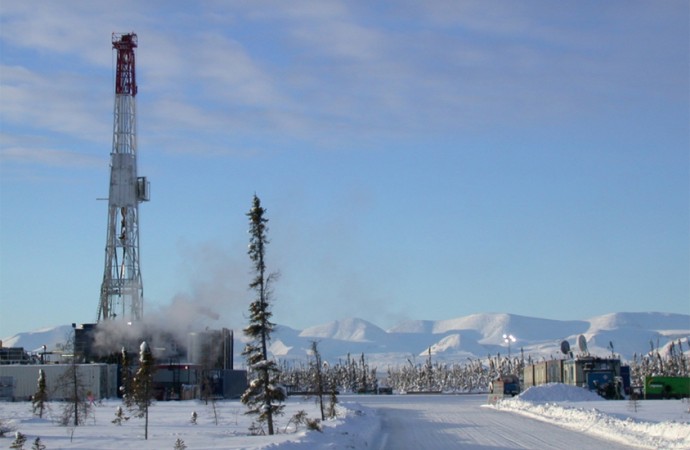 ConocoPhillips plans to cap all four of its exploratory wells located south of Norman Wells this winter. After a spring inspection, the company plans to inspect those wells once every five years.Photo: courtesy of ConocoPhillips.

The NWT chapter of the Council of Canadians says Northerners need more “rigorous” monitoring and reporting when it comes to ConocoPhillips’ well inspection and abandonment plans in the Sahtu region.

The company recently submitted an application to the Sahtu Land and Water Board (SLWB) to cap eight wells on its lease south of Norman Wells this winter. Those include the two horizontal wells hydraulically fractured in the winter of 2014 and the two vertical wells drilled in the winter of 2013. The company also wants to officially abandon its four groundwater evaluation wells drilled to support the exploration program.

Once the wells are capped, ConocoPhillips plans to inspect them in the spring of 2016. In the absence of any problems, the wells will be inspected once every five years or until the company decides to close them for good.

According to Lois Little of the Council of Canadians, that level of monitoring is not sufficient.

“Our main concern is that (ConocoPhillips) is walking away and we don’t know what they are leaving behind,” she said.

While the company agreed to disclose all of the chemical additives used during its fracking operations in 2014, Little questioned the transparency of disclosure sites like FracFocus.ca, which allow trade secrets to be withheld from submissions.

“Further, self-reporting does not replace public accountability by a recognized public authority. This registry also doesn’t require reporting on volumes left onsite and in the ground or on produced fluids. So we are totally in the dark on what toxic materials are being left behind,” she said.

The group’s other concern revolves around a perceived lack of monitoring and public reporting.

“We know the myths about fracking well casings. About seven per cent of them leak, and leakage rates increase as they age,” Little said. “Monitoring every five years is just not good enough, especially given the lack of public knowledge about these casings in this type of terrain and climate and about migration of frac fluids into the groundwater.

“Overall there is a lack of transparency and accountability in this project. This is what happens when projects are approved without environmental assessment,” she said.

The Council sent their input on the application to the SLWB last week, recommending full public disclosure of the total volume of fracking fluids/chemicals that were used, recovered and left in the ground during both exploratory drilling programs.

They have also requested full public disclosure of the produced fluids that may have arisen from the wells with a changed chemical composition due to possible reactions occurring during the fracking process.

Apart from disclosure, the Council asks for a “rigorous plan” with respect to the regular monitoring and reporting of groundwater quality in the vicinity of the four exploratory wells and a plan for immediately responding to a well casing leak.

ConocoPhillips was approached for comment but did not respond as of press time.

The application is open for public comment until June 12 at 9:59 p.m. MST.